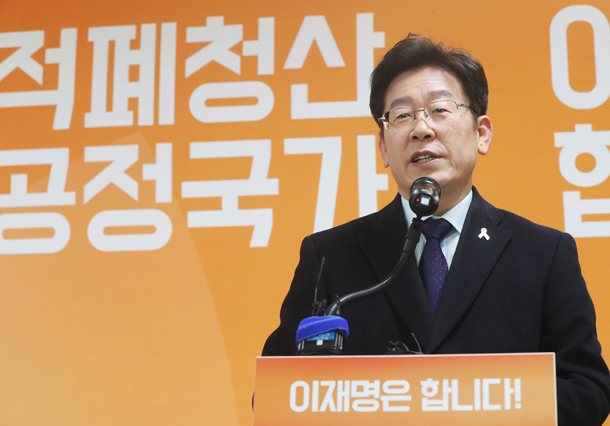 Seongnam Mayor Lee Jae-myung declared his bid for president on Monday with a promise to build a fair and just society, get rid of corruption and put President Park Geun-hye behind bars for her unprecedented abuse of power scandal that has shaken the country.

Speaking before lawmakers at a watch-assembly line in Seongnam, Gyeonggi, Lee proclaimed he was starting a journey toward setting up a country that is fair and just. “I ask all of you to join in my cause toward a just society where no one is being taken advantage of,” said the mayor.

In line with his long-held positions on reining in the economy, which is heavily reliant on a group of conglomerates, Lee said he would move to divest its wealth and power and distribute the fortune for the have-nots.

“As I have no conflict of interest with the chaebol system, I stand as the only person who can disband the chaebol groups,” promised Lee.

In strong terms, he also said Park would not be pardoned under the Lee Jae-myung government for her alleged collusion with her friend, Choi Soon-sil, in extorting money from major companies in return for favors.

“The power is granted to a president on the condition he or she uses it to protect the weak from the abuse by the powerful. In contrary, Park used it to side herself with the powerful by deserting the vulnerable,” said Lee, who also said Samsung vice chairman Lee Jae-yong would also not be pardoned under his leadership for the Samsung chief’s alleged sponsorship of Choi and her daughter in hope for business favor in return.

The 52-year-old mayor has climbed to political stardom in the past few months for his straightforward, harsh criticism of the president and open demand for her resignation at the initial stage of the Choi scandal, which led to President Park’s impeachment.

Lee was the first major politician calling out for Park to step down when virtually no one in the political establishment was with him.

Lee also pledged to provide everyone under 29 and those aged 65 or older 1 million won ($855) a year in basic income by allocating 28 trillion won, or 7 percent of the national budget.

With his straightforward manner and oratory skills, his approval rating skyrocketed to 16.2 percent in the second week of December from 4.6 percent just two months earlier.

He also promises to levy a 50-percent rate income tax on those earning 1 billion won, who Lee says number around 6,000 in the country, a year so that an additional 2 trillion won can be collected in tax.

Lee is a self-made man who had to drop out of middle school to support his family by working at a factory line. The watch-assembly line where he declared his bid was the place where he spent two years working as a teenager.