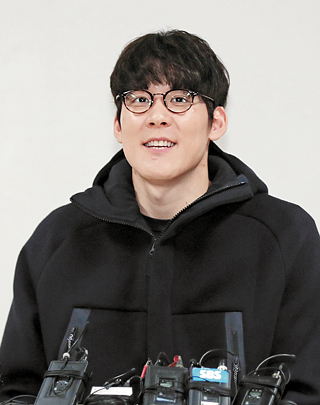 After a roller-coaster year in 2016, Park Tae-hwan had his first open training of 2017 on Monday. Although no important competitions such as the Olympics or the Asian Games are scheduled this year, the former Olympic champion is determined not to squander yet another year.

“I want to set a new personal best within two years,” Park said. “I also want to challenge myself to break the world record.”

Park added, “It’s been seven years since I set my personal best record.” Park set his personal best in 200-meter and 400-meter freestyle event during the 2010 Guangzhou Asian games. Despite winning a gold medal during the 2008 Summer Olympics in Beijing, Park has yet to break a world record.

His hope to set a new world best seemed to be slipping out of his hands when Park failed to make it out of the heats in all the events he participated in during the Rio Games last year.

After his poor showing, skeptics said Park is well past his prime. However, he proved them wrong during the Short Course World Championship last month when he came out with three golds around his neck. Monday’s practice was his first official training in five weeks after the event.

Although Park is uncertain about when he will retire, he said he would like to step out of the pool while in his best form. Still, the 27-year-old swimmer said he feels things are different than when he was in his early 20s.

“I get tired easily compared to when I was younger,” he said. His concern about the age is not unwarranted as it is difficult to spot a swimmer in his late 20s in international meets. But, the swimmer is confident that once he gets into training, he will regain his physical strength soon enough.

“It’s more of a mental issue than an age thing,” Park said.

About the controversy he was mired in during 2016, Park said he hoped others do not fall victim to similar problems.

After testing positive in an anti-doping control test, Park was banned by the International Swimming Federation for doping. His ban was lifted in March 2016, but he faced another bump on his way to Rio when a regulation set by Korean Sport & Olympic Committee (KSOC) barred him from being on the national team.

KSOC got rid of the controversial regulation that halted Park from competing in Rio on Jan. 16, after it came under fire for banning athletes from the national team for three years after they had already served a ban by respective international bodies.