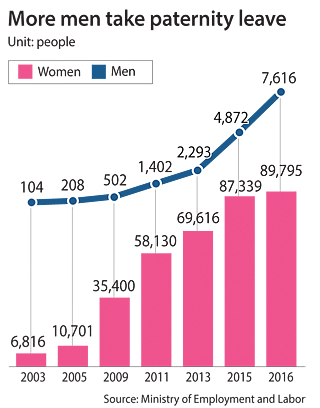 More men are taking paternity leave, but the number doing so remains below 10 percent of the total who take leave for child care, the government said Tuesday.

The number of men who took time off to care for children rose 56.3 percent year on year from 4,872 to 7,616 last year, the Ministry of Employment and Labor said Tuesday. During the same period, the number of Korean workers taking maternity or paternity leave rose 2.8 percent to 89,795.

Although more men are taking time off, those who did so in 2016 accounted for only 8.5 percent of the total. However, the Labor Ministry said the numbers are positive since paternity leave continues to rise.

“It is a very positive thing that more men are taking paternity leave, as it will help solve the problem of women leaving the work force to take care of children,” said Kim Jong-chul, a Labor Ministry director. “The government will continue to come up with plans to have the working environment in the country where people can take time both at home and in the workforce.”

According to government data, the rate of men taking paternity leave was higher at large companies compared to the smaller ones, which suggest that the culture is still not as common in smaller firms.

The Labor Ministry said there were more Koreans who applied for flexible working-hour programs to look after their children instead of taking maternity or paternity leave. Those who are not on leave can apply for such programs.

A total of 2,761 Korean workers applied for the flexible working-hour programs, 33.9 percent more than compared to the 2,060 in 2015. During the same period, the number of men applying for such programs jumped nearly 200 percent from 170 to 378.

To boost the number of people requesting leave, the government is expanding financial support to small and midsize firms.

The government currently gives 200,000 won ($171) a month per employee to a company if it allows its worker to take paternity or maternity leave. However, the Labor Ministry said it will no longer give financial support to large companies but it will raise the amount given to small and midsize firms to 300,000 won.

The Korean government’s leave policy for child care applies to both male and female workers that have children younger than 8 years old to take a year off. If only one of the couples is taking a leave, they can take 2 years off. They receive about 40 percent of the salary that they normally received during the break.