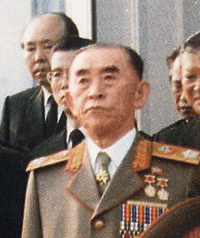 Their removal from senior government positions was described Tuesday by an official in the South Korean government under the condition of anonymity. The source said he had no information on why they were purged or when, but doubts that they peacefully retired because they were all in their 60s, which is too young. “Senior officials are mostly aged 70 or above,” he said.

Kim Yong-hyun, a North Korean studies professor at Dongguk University in Seoul, said they could have been purged because Kim Jong-un was unsatisfied with their work or because he felt threatened by their standing. O, who died in 1995 at the age of 78, had three sons: Il-hun, Il-jong and Il-su, in the order of their year of birth. Il-hun worked in the Unified Front Department, an intelligence arm of the Korean Workers’ Party. Il-su was in the Ministry of Foreign Trade. Il-jong served as a military director in the Workers’ Party, one of the most coveted positions in the North’s leadership.

In a Who’s Who booklet of North Korea’s high-profile figures compiled by the South’s Ministry of Unification and disclosed Tuesday, May 2015 was the last time O Il-jong appeared in state media, when he accompanied Kim Jong-un to an army unit for a so-called field inspection.

O Jin-u was so revered in North Korea that the communist regime held a national memorial service for him in 2015 on the occasion of the 20th anniversary of his death.

Addressing him as a “revolutionary martyr,” the official Korean Central News Agency wrote in a related article at the time that he was a “prominent activist of the party, state and army,” who “performed distinguished feats in the two revolutionary wars against the Japanese and U.S. imperialists and in the building of revolutionary armed forces and socialist construction.”

“Kim Il Sung and Kim Jong-il usually looked after these revolutionary martyrs and their descendants,” said Prof. Kim, “making sure they held high-ranking positions in the government and were well-paid.”

In contrast, Kim Jong-un, who rose to power after his father Kim Jong-il died in December 2011, has been inclined to wipe out anyone who showed the potential to challenge his power, the scholar added.