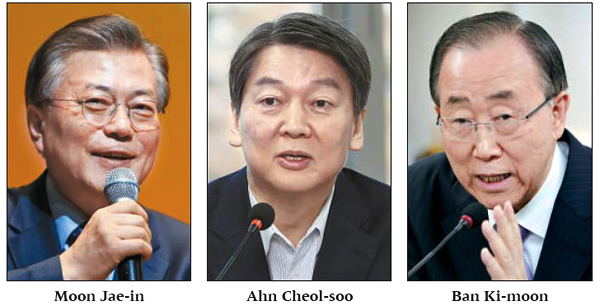 Talk about forming a coalition government following the presidential election gained traction after frontrunner Moon Jae-in said Monday that he was open to sharing power, saying his party “alone cannot achieve a change of power” in the election.

Moon, who leads in polls for the next presidential election and is trailed by former UN chief Ban Ki-moon with nearly a 10-percent gap, said Monday during a discussion with journalists in Gwangju that he would reach out to the two other opposition parties, the People’s and Justice parties.

“If cooperation with other [opposition] parties is necessary, then we could form a coalition government,” said Moon.

Moon’s remark was echoed on Tuesday by other Democrat presidential hopefuls, sparking suggestions that the opposition come up with detailed plans about sharing power in a way similar to Germany.

Responding to Moon’s comment, Seoul Mayor Park Won-soon, Seongnam Mayor Lee Jae-myung and Rep. Kim Boo-kyum of the Democratic Party issued a joint statement urging the three parties to iron out their differences to prepare for a three-party coalition government to ensure the liberal bloc succeeds the Park Geun-hye government.

Rep. Kim called for the joint primary by the three parties to field a candidate to represent the liberals, saying, “We have a painful memory of handing power over to ruling party candidate Roh Tae-woo [backed by dictator Chun Doo Hwan] in 1987 because the liberal bloc failed to field a joint candidate at the time.”

Seongnam Mayor Lee and former People’s Party chairman Ahn Cheol-soo are pushing for a run-off presidential vote in which the two candidates with the most votes compete in a final round to clinch the presidency if neither wins a majority.

Should the run-off system be applied, liberals and conservatives would iron out their differences and throw their support behind one of the two finalists.

Choi Jang-jip, a professor emeritus of political science at Korea University, said introducing a run-off election would lead to the institutionalization of coalition governance.

“In France, the run-off voting system is applied for both presidential and parliamentary elections. And because of that, it is not uncommon for parties on the left and right there to form alliances every time an election comes along,” the professor told the JoongAng Ilbo Monday.

He said adopting such a system was the “only way” to make parties reach out to each other in coalition.

Former UN Secretary General Ban Ki-moon is also seeking to forge a political coalition with figures outside the political parties and opposition politicians opposed to Moon Jae-in, as well as conservatives not aligned with the pro-Park faction in the ruling Saenuri Party.

On Monday, Ban met with former National Assembly Speaker Chung Ui-hwa, who has been involved in creating a third zone to field a candidate.

Ban is said to have stated that he would shorten his term to three years from five if elected under a changed Constitution so that the next presidential election could take place with the general election in 2020.

After his victory, Kim Dae-jung appointed Kim Jong-pil as prime minister and granted him authority to appoint some cabinet members. But the coalition only lasted three years and collapsed in 2001.

In 2005, former President Roh Moo-hyun proposed that the opposition Grand National Party, the predecessor of the Saenuri, exercise appointment authority in coalition with his government.