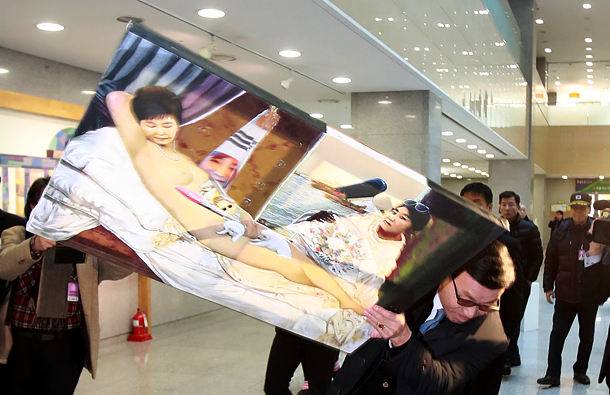 Some people, presumed to be members of a conservative civic group, rush to the assembly building in Yeouido, western Seoul, on Tuesday to damage the painting “Dirty Sleep” by flinging it to the ground. [YONHAP]

After the display of a satirical painting depicting a nude President Park Geun-hye the main opposition Democratic Party on Tuesday decided to refer its lawmaker, Pyo Chang-won, to its ethics panel for hosting the exhibition.

About 20 people, presumed to be members of a conservative civic group, rushed on Tuesday to the lobby of the Lawmakers’ Office Building attached to the National Assembly in Yeouido, western Seoul, where the painting was on display, to damage the painting titled “Dirty Sleep” by flinging it to the ground.

The artists participating in the exhibition, including Lee Guyeong, who made the painting, then gathered at the building to issue a statement demanding compensation for the damages and respect for freedom of expression.

The exhibition started on Friday and the painting quickly became the talk of the town.

The painting’s composition is generally based on the 19th-century French painter Edouard Manet’s famous “Olympia”(1863).

In it, Park is lying on a bed and her long-time friend, Choi Soon-sil, is offering up a bouquet of syringes while the Sewol ferry is seen out a window sinking into the sea.

The painting portrays the suspicion that Park was sleeping or receiving cosmetic treatment during the April 2014 Sewol ferry sinking. Park’s head is combined with a nude body from the painting “Sleeping Venus”(1510) by Italian Renaissance master Giorgione, which inspired Titian’s “Venus of Urbino” and later Manet’s “Olympia.” Unlike in “Olympia,” which is distinguished by the woman looking directly at the viewer, in the new work Park looks down, as if in shame.

The ruling Saenuri Party harshly criticized the exhibition of the painting. “It is disguised as satire but is actually an insult to a human character and a form of sexual harassment,” said Rep. Kim Jung-jae, spokeswoman of the Saenuri Party on late Monday.

Even Moon Jae-in, a potential presidential candidate from the Democratic Party, expressed deep regret over the exhibition.

“The painting should be respected as the artist’s freedom of expression but it’s not proper for the painting to be shown in an exhibition hosted by a politician at the National Assembly,” Moon wrote on his Facebook account on Tuesday morning. “The territories of arts and politics are different. In arts, criticism and satire are important but in politics dignity and restraint are important.”

Later on Tuesday, Rep. Pyo explained on his Facebook page that he did not choose the painting himself. The event was organized by an artists’ group, he said, and he only requested that the National Assembly provide a venue.

Pyo said he does not have the authority to remove the painting.

Later on Tuesday, the artists decided to withdraw the exhibition themselves but to hold it in another venue near Chungjeongno Station in central Seoul soon, saying in the statement, “The Park administration’s blacklist [of writers, artists and entertainers critical of the administration] drove us to hold the exhibition. The essence of the show is freedom of expression and satire. Don’t distort our intention, citing sexual harassment.”