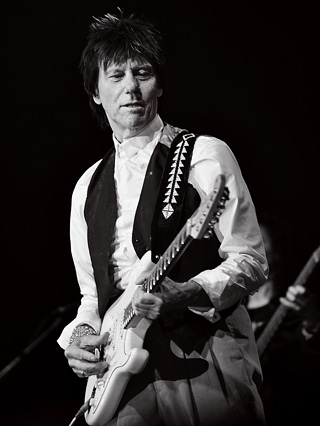 The blistering winds of the cold winter in Seoul seemed incomparable to the fiery spectacle provided by living music legend Jeff Beck. Gracing the stage at Olympic Hall Sunday evening, the 72-year-old rock and roll superstar provided an intimate show to rival his previously well-received concerts held in Korea.

The signature white guitar hanging from the musician’s shoulders seemed like an extension of his body, like another limb grown for the purpose of creating music. Beck’s playing style was so fluid and dynamic, often sounding like a singing voice complimented by human nuances. Hearing the veteran live in a room filled with sounds produced from his vintage guitar amplifier elevated the listening experience.

Often referred to as the original guitar hero, Jeff Beck is an eight time Grammy Award winning artist with an impressive professional career spanning over half a century. He is one of the three notable guitarists (along with Eric Clapton and Jimmy Page) having played with The Yardbirds, a highly influential 1960s English rock band associated with the cultural phenomenon known as the “British Invasion.”

Needless to say, it was certainly an awe-striking experience for fans of the genre. The guitarist was a natural on stage, smiling and interacting with his band like a small family. The show was undoubtedly about Jeff Beck, though - there was no questioning that.

His guitar volume was nearly double the levels of backing guitarist Carmen Vandenberg, but they eloquently matched to the point that the sound of the guitar didn’t make a high-pitched piercing noise, a trap many lead guitarists fall into. This speaks volumes for the years that Beck has under his belt, as the overall listening experience wasn’t a struggle among competing instruments in a tight spectrum. Beck would adjust the tone and volume of his instrument to fit his songs, fading in and out appropriately.

Guitarist Jeff Beck returned to the stage in Korea to promote his latest album “Loud Hailer” at the Olympic Hall in southern Seoul on Sunday night. [PRIVATE CURVE]

The nearly two-hour set consisted half of originals from his latest record “Loud Hailer,” in addition to fan favorites such as “Beck’s Bolero” and “Goin’ Down.” Performance-wise, Beck took a back seat to focus on his playing while the stage was taken by the charismatic Rosie Bones and Jimmy Hall, vocalists who were applauded by the audience, surprisingly, just as much as Beck.

However, the band faded to the background near immediately once Beck started playing the first line of his ballad “Cause We’ve Ended as Lovers.” Beck’s control over his instrument made his performance feel authentic, and, as mentioned before, like a singer’s voice. The audience remained mesmerized in a high after each musical passage as Beck masterfully maneuvered the volume and vibrato controls of his guitar. His playing, however, was not flawless, and there were some minor hiccups during the set. The overall delivery from the band, however, was impressive.

A number of young guitarists from local bands were revealed to have seen the guitarist live as well, as the audience was littered with musicians slinging guitar cases over their shoulders. Particularly, Jungmo from the band Trax said, “You are a guitarist’s guitarist!” on social media, expressing his excitement at seeing Beck live.

Ultimately, Beck proved why he is on top. Despite the unfavorable conditions such as the weather and jetlag, the legendary guitarist and his band gave such an explosive performance that they more than deserved their standing ovation.