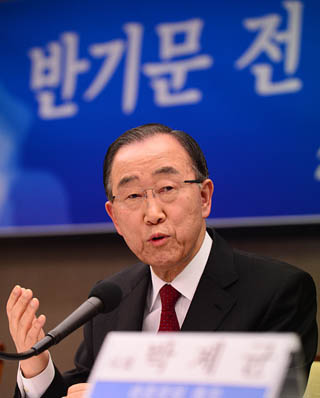 Ban’s meeting with the 23 lawmakers, including former Saenuri floor leader Chung Jin-suk, four-term lawmaker Na Kyung-won and other party members who represent districts in Chungcheong, Ban’s home province, comes amid the former UN chief’s efforts to expand his political support base to prepare for his presidential race.

During an undisclosed one-hour long meeting, Ban reiterated his stance that revising the Constitution was necessary to divest the excessive amount of power invested in the presidency and asked for an active role by the 23 lawmakers in amending the Constitution.

Many of the 23 ruling party lawmakers who attended the meeting session had already expressed their intention to join Ban’s journey toward the presidential office, even if doing so requires them to defect from the Saenuri Party, which already suffered the defection of 31 of its members over the past month, shrinking its number of lawmakers to 96.

“Many attendees requested Ban to become a politician who upholds conservative principles. And Ban told them he would,” Lee Do-woon, Ban’s spokesman, told reporters following the meeting.

Ban continued what many saw as an effort to boost his presidential prospects by attending a discussion forum with senior journalists at the Press Center in Seoul later in the day.

During the discussion, he again stressed the need for the amendment and said the political circle should rush to set up the revision process so that the Constitution could be amended before the presidential election, which could take place in April or May depending on the Constitutional Court’s deliberation schedule on a motion to remove President Park Geun-hye from office.

The election must be held within 60 days after President Park is removed from office.

Asked if it would be physically possible for parties to come to an agreement on such an issue in a short period of time, Ban said it was a matter of political will, adding that more than two-thirds of the Assembly’s 300 lawmakers have expressed their support for the amendment.

On the question of his lack of experience, the lifelong diplomat said he had learned “global leadership” from his encounters with heads of foreign governments as UN chief, a process he said gave him the experience of a “higher-level of governance.”

Though Ban often cites his 10-year experience as case examples as to why he could be a successful leader, Western media have called him the “worst” among all UN former chiefs and the “dullest,” arguing that he is addicted to protocol and overtly pro-Washington.

On his potential rival Moon Jae-in of the Democratic Party, who leads in most polls over Ban by more than a 10-percent, Ban questioned Moon’s judgment as a politician, citing concerns over Moon’s remark that he would visit Pyongyang first over Washington as president if doing so could resolve a nuclear gridlock.

While Ban is continuing his apparent promotion activity, his approval rating is continuing to slip. Ban came in a distant second with 18 percent while Moon ranked first with 34.8 percent, displaying a 16.8 percent gap in a poll conducted by the pollster R&Search of 1,165 adults nationwide on Sunday and Monday.

Since his return to Korea on Jan. 12, Ban’s approval rating has fallen in stark contrast to earlier predictions that his presence at home would boost public support.