Better drugs, or more of the same

Better drugs, or more of the same

Samsung Bioepis, a pharmaceutical company under Samsung Group, has temporarily suspended development of so-called biobetters, a promising type of medicine that could ween the company off its dependence on generic biosimilars.

“It’s true that we once conducted research on developing biobetters, but there is no ongoing project at the moment,” a Samsung Bioepis spokesman said. “We judged that for now, it’s better to focus on studying biosimilars.”

Biosimilars refer to biopharmaceuticals that are generic duplicates of drugs whose patents have already expired, while biobetters are drugs that are based on biosimilars but engineered to have more enhanced effects.

In 2010, Samsung Group named biopharmaceuticals, drugs that are extracted from biological sources and often treat rare illnesses, as one of five areas to focus on for major investment. A year later, the conglomerate established Samsung Biologics, which manufactures medicine on contracts from global pharmaceutical companies. In 2012, Samsung Bioepis was established to research and develop new medicine. 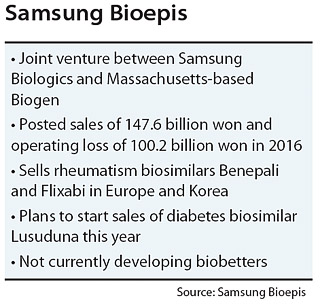 Six years after Samsung made its bet on bio, sources in the industry are expressing concern that the company may be overly focused on current revenue instead of future investment by giving up on development of new medicine and settling for sales of generic drugs.

“Apart from biosimilars, the company has two to three biobetters that are in the initial stages of development,” Ko Han-sung, CEO of Samsung Bioepics, said at a press conference in July 2015. Earlier last month, Ko said in a meeting that “a fierce battle is expected to take place this year among original biomedicine developers and biosimilar companies” and emphasized the importance of competitiveness in the global market.

In terms of numbers, Samsung Bioepis seems to be on the right track for growth. The company’s sales last year totaled 147.6 billion won ($125.5 million), a more than fivefold increase from the previous year’s 23.9 billion won. Operating loss fell 37.8 percent to 100.2 billion won. Although the company has seen operating losses since its first year of establishment, it expects to be in the black within two years.

Last year, the company started sales of two biosimilars in Europe: Benepali, a generic of Pfizer’s Enbrel, and Flixabi from Janssen’s Remicade. The diabetes medicine Lusuduna, a biosimilar of Sanofi’s Lantus, will begin sales in Europe during this year’s second half.

But a company can’t depend on biosimilars forever. The market has less potential in the long run compared to biobetters, or newly developed biomedicine.

Biobetters, on the other hand, are closer to newly developed medicine than copies and therefore require a higher level of technology and research capacity. And since they are a new drug, their patents will help companies that develop them last in the market for a good while. Moreover, they are two to three times more expensive than biosimilars and take less cost and risk compared to developing a whole new biological medicine.

There are other Korean pharmaceutical companies taking a stab at biobetters. Green Cross’ treatment for Hunter syndrome, Hunterase, is undergoing phase II clinical trials in the United States. Daewoong Pharmaceutical’s subsidiary Hanall Biopharma plans to finalize phase I trials of its dry-eye syndrome treatment, HL-036, by this year’s first half.

For many companies, though, biobetters remain a difficult realm of research. Since most biopharmaceuticals are developed for rare illnesses, it is not easy to find enough patients to conduct clinical trials. The possibility of failure is also higher than with biosimilars.

Industry observers say Samsung Bioepis should boost R&D investment for biobetters and new biomedicine. “Companies should stay away from clinging to short-term sales from generics,” said Ryou Hyo-sang, head of CHA University’s business school. “Immediate profits are important, but to go beyond that, Samsung Bioepis needs to come up with a long-term plan for biobetter and new biomedicine development.”