Lee Chung-ah steps onto the stage : The actress is hoping to start a new chapter in her career as a thespian

Lee Chung-ah steps onto the stage : The actress is hoping to start a new chapter in her career as a thespian 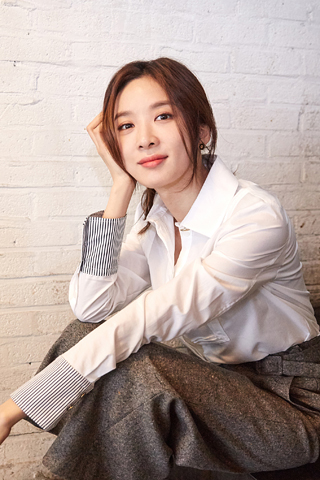 Actress Lee Chung-ah has been acting for the past 14 years, but her performance in a play titled “Secret of Flowers” is her first try at theater.

Directed by Jang Jin, “Secret of Flowers” is a female-centric black comedy.

The 33-year-old says she loves being on stage and interacting with the audience members - something that she says she’s never experienced before.

The daughter of a veteran theater actor, Lee is hoping the play would mark a new chapter of her acting career.

Ilgan Sports, an affiliate of the Korea JoongAng Daily, talked to the actress recently about the play, her thespian father and her high-profile relationship with actor Lee Ki-woo.

“We have about ten more performances,” she said at the interview. “We will be touring outside the Seoul, so it’s not an end. But still, since we have a few shows left, I feel extremely sad.”

Q. What made you take part in a play?

A. I actually got an offer from Bae Jong-ok [an actress who is also in the play] a day before a planned trip to Italy. I had only one day to think. I always thought that I wasn’t ready to be in theater but I read the first 15 pages of the script and fell in love. I thought if I was ever going to get into theater, it would be a good opportunity. I said yes and I read the rest of the script on my way to Italy. I thought it was destiny, since the play is also set in Italy.

Why did you hesitate to get into theater?

I guess it has to do with my dad [Lee Seung-cheol, a theater actor]. My dad hasn’t performed on TV or films, so even if my performance doesn’t measure up to his standards, he is generous. But the theater world is filled with the people who worked with him, so I didn’t want to tarnish his reputation. But my dad knows better than anybody else that I want to be a good actress who stays around for a long time. So I thought he would understand.

Did he come to see you perform?

He did on day two. I asked him to come on the opening day, but he said there is a jinx that a play always screws up on day two and came that day. My close friend was sitting next to him and the friend told me that he watched without a smile during Act One. He was more relaxed and enjoying the show from Act Two. I have become more confident and told him to come again. He said he would come unexpectedly, so I’m always so nervous.

How did you become Monica, your character?

In fact, there is the female Monica and the male Monica. The female version is actually somewhat different from the real me. So, I’m more drawn to the male version. I also had hard time playing the female Monica with the high tone [voice]. I actually have weak vocal cords, but as I practiced and practiced, I improved. When the director told me that my voice was loud enough, I was so relieved.

What was it like working with Bae and Jang?

This is my third piece with Bae. She encouraged me to join the play. I rely on her. She always comes three hours before the show. I want to be like her. Working with Jang, I learn so much that I even feel like I should pay for the lesson. I’ve never been so engaged into theater as a genre of art. It’s amazing how a man can read women’s emotions so well. Perhaps it’s because Jang is a writer and actor himself.

How is your boyfriend, actor Lee Ki-woo, responding to the show?

He told me it’s one of the funniest performances he’s ever seen. I would always tell him I’m going to practice [for the play]. He said he feels motivated seeing the actual play (laughter).

You seem to be more prolific than you were before. What prompted such a change?

Things changed after my mother passed away. In the past, I would do one or two pieces a year because I felt after I let go of a character, I needed time to reboot. But it turns out, going from one character to another was just fine. I feel like I’m getting new energy as each new character comes along.

What’s your wish for the new year?

I hope to explore more diverse sides of myself through different characters and different genres. I also want to use the skills I learned from theater in new [dramas and films]. I can’t wait.