Mattis lands in Seoul to show resolve about North

Mattis lands in Seoul to show resolve about North 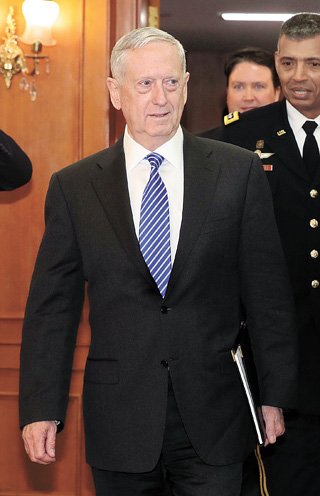 U.S. Secretary of Defense James Mattis walks into the government complex in central Seoul on Thursday on his way to meet with Hwang Kyo-ahn, the acting president. [JOINT PRESS CORPS]

His visit comes amid heightened tension in Northeast Asia and the United States after North Korean leader Kim Jong-un declared in a New Year’s speech on Jan. 1 that the regime was in its “final stage” of test-firing an intercontinental ballistic missile (ICBM), the first of its kind.

Arriving in a Boeing E-4B Advanced Airborne Command Post, more commonly known as the “Doomsday Plane” because it was designed to enable Washington’s highest-level military officials to stay in command during a nuclear crisis, Mattis kicked off a two-day trip in Yongsan District, central Seoul, at the headquarters of the U.S. military forces in South Korea.

Mattis, a retired four-star Marine general, was briefed by Gen. Vincent Brooks, commander of the U.S. Forces Korea, on “overall North Korean trends and the security situation of the Korean Peninsula,” according to the South’s Ministry of National Defense.

The Pentagon chief then made a courtesy call to Prime Minister Hwang Kyo-ahn, the acting president, and also Kim Kwan-jin, head of the National Security Office at the Blue House, in order to explain Trump’s policies involving Pyongyang and other Asian countries.

In the evening, he attended a dinner reception hosted by National Defense Minister Han Min-koo.

Today, Mattis is scheduled to have a brief discussion with Foreign Affairs Minister Yun Byung-se, followed by a defense ministerial meeting with Han and a wreath-laying ceremony at Seoul National Cemetery.

Later today, he will fly to Japan to hold a ministerial meeting with his Japanese counterpart and pay a courtesy call on Prime Minister Shinzo Abe.

The agenda for his meeting with Defense Minister Han included an assessment of North Korea’s nuclear weapon and missile threats, countermeasures for any provocations, and a general discussion of the Korea-U.S. alliance, South’s Defense Ministry said.

Reuters reported Thursday that Mattis told journalists shortly before landing in Seoul that he “will talk to them [South Korea] about Thaad absolutely,” referring to the plans to deploy a Terminal High Altitude Area Defense system in South Korea this year.

“Thaad is for defense of our ally’s people, of our troops who are committed to their defense,” the news agency quoted Mattis as saying.

South Korean military sources who spoke on the condition of anonymity said Seoul will also request Washington during the ministerial meeting to deploy U.S. strategic weapons on a regular basis to South Korean soil to better respond to North Korean threats, which Washington has been hesitant to do so far in fear of provoking Pyongyang and displeasing Beijing.

South Korean Defense Minister Han was one of the first foreign defense ministers Mattis spoke with. In a Tuesday phone call Mattis told Han that the U.S.-South Korea alliance of more than 60 years “remains even more relevant today” and that the United States was “determined to take steps to strengthen the alliance further to defend against the evolving North Korean threat,” according to a statement issued by the Pentagon.

Seoul has yet to acknowledge any signs that the North was actually preparing to test an ICBM, although several military sources here claim to have discovered two new missiles along North Korea’s eastern coastlines that could relate to Kim Jong-un’s threat.

In a commentary entitled “Reckless Saber-rattling of Inviting Punishment” on Thursday, North Korea’s official newspaper Rodong Sinmun lashed out at joint military drills carried out by Seoul, Tokyo and Washington last week, calling them “nothing but ridiculous moves” to undermine peace and stability in Northeast Asia.

On Jan. 27, the three countries kicked off a three-day “missile warning exercise” off their respective seas in preparation for a possible missile, mobilizing Aegis-equipped destroyers to practice spotting and tracing North Korean missiles under simulated situations.

The drill was the third of its kind.

“They are grave military provocations to the DPRK and unpardonable acts of disturbing peace and deliberately aggravating the situation on the Korean Peninsula and in the region,” the newspaper wrote, using the acronyms for the North’s official name, the Democratic People’s Republic of Korea.