A handful of animal shelters struggle to meet overwhelming demand

A handful of animal shelters struggle to meet overwhelming demand 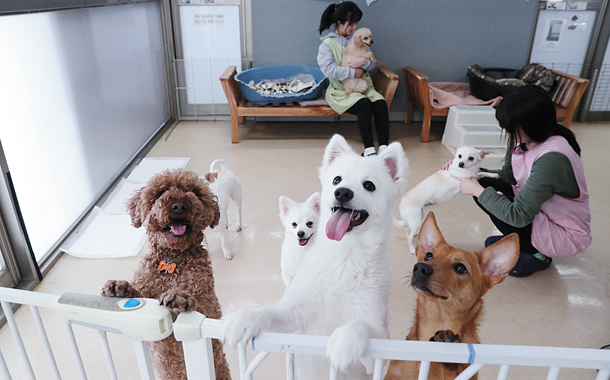 There were about five or six dogs gathered behind a white fence next to the entrance of the Tinkerbell Project’s adoption center in Hwagok-dong, western Seoul, on Tuesday. The center is run as a non-profit that connects abandoned pets with new owners. Opening in March 2014, there were originally 15 dogs and seven cats in the center. Unable to reunite with their owners and facing euthanasia, animals are moved to this facility, prolonging their lives for at least another day.

“The optimum number of animals the center can care for is already filled,” said Park Hyeon-ju, a staff worker at the Tinkerbell Project’s adoption center. “We put up about 60 animals for adoption last year, but compared to the number of abandoned animals in one year in Seoul, it’s an extremely small number. As time passes, large dogs and mixed-breed dogs aren’t being adopted.”

According to the Seoul Metropolitan Government, there were 8,684 abandoned pets last year. That is more than the number of abandoned animals in 2011, but abandoned pets that are not saved give birth to more litters and the situation deteriorates. Feral cats and dogs in residential areas around Mount Bukhan, central Seoul, are beginning to become an issue.

The findings of the Seoul Institute, originally established by the Seoul Metropolitan Government as the Seoul Development Institute, places Seoul’s rate of abandoned pets at 0.8 percent. This is four times greater than Tokyo’s abandoned pet rate. Also, of the households in Seoul that raise pets, 42.6 percent said they “felt the urge to give up or abandon” their pet.

Although the issue of abandoned animals remains unresolved, animal welfare support facilities, which shelter animals and facilitate adoptions, are minimal. In the metropolitan area there is the Animal Rehoming center operating inside Gwacheon Seoul Grand Park, Gyeonggi. In addition to this, the Tinkerbell Project’s adoption center and the Korea Animal Rights Advocates’ center, there are just three locations operated by private organizations. From 2011-2015, the majority of animals nationwide had to be euthanized as there was not enough space in these facilities to meet demand.

An SOS center for pets is planned to open in Mapo District, western Seoul, to administer to pets and facilitate adoptions in July. Baek Jin-seon, action officer on the animal policy team, said, “The SOS center’s current operating objective is medical treatment for abandoned pets and education on preventing animal abandonment. Stopping first-time owners from abandoning pets is also second on the agenda.”

“Animal welfare support facilities are not just for preventing animal abandonment,” said Yoo Kee-young, senior research fellow for the Department of Safety and Environment Research at the Seoul Institute, “but also play a role in controlling contagious diseases. After preparing facilities such as animal hospitals, shelters and adoption centers, there must eventually be at least four locations centering on residential districts inside Seoul.”

“It’s true that in the long-term, the SOS Center as it is one facility is insufficient,” said Kim Mun-seon, head of animal policy in the Seoul Metropolitan Government. “On the basis of the operational results of the SOS Center, we will examine the establishment of facilities and operational plans in Seoul.”