Jenkins & Chazelle: filmmakers in the spotlight

Jenkins & Chazelle: filmmakers in the spotlight 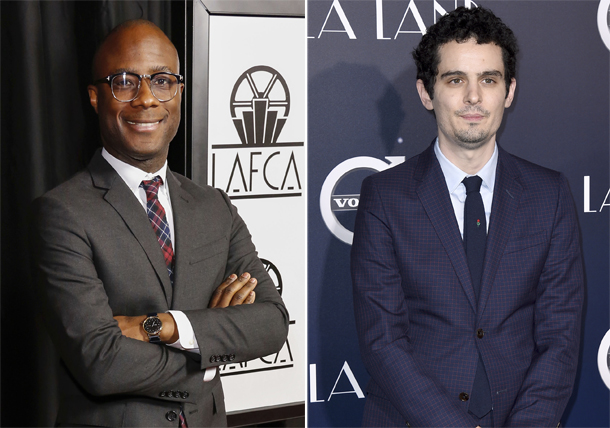 NEW YORK - At the forefront of this year’s Oscar race are two filmmakers in their 30s with seemingly limitless careers ahead of them: Damien Chazelle, the 32-year-old wunderkind behind “La La Land” and Barry Jenkins, the 37-year-old writer-director of “Moonlight.” The combined nominations of their films amount to 22 even while their ages add up to less than that of Martin Scorsese or Steven Spielberg.

It’s rare for young directors to rise to such heights. If Chazelle, the favorite, were to win best director, he’d be the youngest winner ever. Should Jenkins pull it off, he’d be the youngest since Sam Mendes won in 2000 for “American Beauty,” and, more significantly, he’d be the first African-American filmmaker to win the award. History seems sure to be made, one way or the other.

On an awards circuit that has brought them together repeatedly, Chazelle and Jenkins (whose screenplays are also nominated) have expressed mutual respect and admiration for each other. If they are Academy Awards rivals, they don’t act like it.

“It’s nice to have somebody who’s sort of on your side of the age bracket to look across the room and be like, ‘This is crazy, right?’” says Jenkins. “Yeah, this is crazy.”

They’ve crossed paths before. Both released their first films - “Medicine for Melancholy” for Jenkins and “Guy and Madeline on a Park Bench” for Chazelle - around the same time: late 2008, early 2009. Jenkins’ initial plans for his sophomore film stalled. Chazelle, who wanted “La La Land” to be his second film, was forced to pivot instead with “Whiplash,” which became his Oscar-nominated breakthrough.

“I’ve admired Barry Jenkins from afar since ‘Medicine for Melancholy,’” says Chazelle. “I definitely feel the future of cinema is in good hands with him. I just think he’s one of the finest filmmakers on the planet.”

They are very different filmmakers. Jenkins, whose film bears echoes of his Miami upbringing, has a rare gift for lyricism and startling intimacy. Chazelle, the Harvard-educated son of college professors and a former jazz drummer, makes movies with a bright musicality that cloaks darker questions of art and ambition.

Yet both are clearly auteur filmmakers expressing a personal vision with a deep awareness of their place in cinema history. (Just watch Jenkins’ recent kid-in-a-candy-store moment at the Criterion Collection offices.) Cameron Bailey, artistic director of the Toronto International Film Festival, has programmed both of Jenkins’ films and two of Chazelle’s. That each has channeled movie history while finding their own voice, he says, is proof of a “healthy future ahead for movies.”

“The thing I find most heartening is that they’re both cinephiles,” says Bailey. “They’ve watched a lot of movies, they grew up immersed in movies, and it shows. You can see the classic musicals - and not just Hollywood musicals but French musicals and films from all over the world - in ‘La La Land.’ And you can see in ‘Moonlight’ the influence, which Barry’s talked about, of Claire Denis, of Hou Hsiao-hsien, of Wong Kar-wai, of a lot of European and Asian cinema.”

Both Chazelle and Jenkins are now in that enviable position of being able to get just about anything they want made. But it’s less clear what kind of path Hollywood has to offer either.

The last time a number of nascent filmmakers with such self-evident talent were breaking through - the likes of Paul Thomas Anderson, Wes Anderson, Sofia Coppola - the independent film world was booming. But the landscape Jenkins and Chazelle find themselves in is far less hospitable to emerging auteurs.

In a Hollywood where blockbusters are the de facto business, landing a franchise has been the trajectory of many young directors, from Colin Trevorrow (“Jurassic World”) to Ryan Coogler (“Creed”). Meanwhile, others like Lena Dunham and Steven Soderbergh have gravitated toward television for greater artist freedom.

But “La La Land” and “Moonlight” are both, in their own way, big-screen arguments for the power of movies, whether to entertain or to create empathy. Unlike previous generations of filmmakers, Jenkins and Chazelle became directors at a time when the cultural sway of the big screen was waning. Their movies are each a kind of a response to those who would sound the death knell for film.

“It’s not obvious why a lush, romantic musical - something intimate and beautiful and fragile - should be such a blockbuster, except that it is. And it’s moving people because Damien felt strongly about it,” says filmmaker Robb Moss, Chazelle’s film professor at Harvard. “Currently, success means something that’s branded. I think Damien is something else, something other than that. I think there’s a desire for something other than that. Whether that can withstand the market forces and our political system, I don’t know. I hope it does.”

So don’t expect a comic-book movie from Chazelle, nor from Jenkins. Adele Romanski, friend of 15 years and producer of “Moonlight,” says the film originally stemmed from their mutual sense of dissatisfaction. But now, opportunity abounds.

“It’s a moment of endless possibilities. I don’t think there’s a superhero movie in it for us, though never say never,” says Romanski. “However far we’ve advanced things with ‘Moonlight,’ maybe we’ll see if we can move things a little further with the next thing. We’re not just creators of entertainment and escapism. I think we feel a responsibility to that.”

Jenkins hasn’t yet announced his next project but he and Romanski have been developing a limited series based on Colson Whitehead’s novel “The Underground Railroad.” Chazelle is planning to next direct a Neil Armstrong biopic that will reteam him with “La La Land” star Ryan Gosling. Expected to begin shooting early this year, it’s Chazelle’s first film for a major studio, Universal. The project originated with Clint Eastwood, the oldest to ever win best director. AP