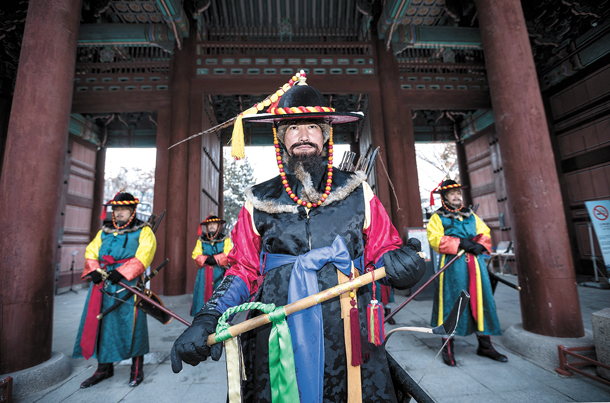 Ahn In-sang acts as a Joseon Dynasty era chief gatekeeper in front of the Daehan Gate at Deoksu Palace, Seoul. Ahn is an actor with 30 years of theatrical experience. Beginning as a royal guard, Ahn is now the chief gatekeeper. [WOO SANG-JO]

Inside Deoksu Palace at 11 a.m. Wednesday, fifty men in Joseon Dynasty era (1392-1910) military attire march in procession. At the vanguard, the banners of the royal guard flutter in the wind. Unlike his colleagues in the military and the other guards, one man appears in the dress of a general, a broad-rimmed felt hat and robe. He is the chief gatekeeper defending the Daehan Gate of Deoksu Palace.

Ahn In-sang, 57, acting chief gatekeeper, observes the 15-minute ceremony with statuesque calm. Dressed in the garb and carrying himself in the manner of a Joseon Dynasty general, Ahn is often bombarded with requests for photos by tourists after the conclusion of the ceremony. After about 10 photos, he usually takes a break.

Ahn has acted as a gatekeeper since March 2014. Starting as a lowly royal guard, he was promoted to chief gatekeeper in early 2015. Due to his solid background in acting, with about 30 years of experience in a theatrical troupe, Ahn was able to quickly climb to chief gatekeeper. Ahn’s stolid expression and manner ably convince the audience they were glimpsing a piece of Joseon history.

Ahn graduated from Anyang Arts High School in 1979 and entered the theatrical world. Scraping by, doing odd jobs such as affixing posters to walls and telephone poles, or pul-ting, a portmanteau of glue and posting, Ahn appeared on stage in his very own plays, “Impossible Impossible” and “Cadenza.” Ahn was also on stage for classic plays like “Hamlet.” He wanted to be known as a theatrical actor, but he had to face the hard truth. Marrying in his early 30s, Ahn had more pressing concerns and dabbled in everything from welding to crane operating.

However, his dream was always acting. “While doing construction work, if I saw a good play, I would practice it,” said Ahn. “Combining the time I spent practicing and performing for a three-month play in the early 90s, I would receive 1.5 million won ($1,288). That wasn’t even a month’s pay in construction work. All the same, I was happiest when I was acting.”

After passing his mid-thirties, his opportunities to act slowly dwindled. The hours he spent working to support his acting became insufficient. Fortunately, an acquaintance in the acting world suggested he try the changing of the guards ceremony. Starving to act, Ahn thought at least it held some relation to theater. “During the ceremony, ‘I was a Joseon Royal Guard,’” said Ahn. “The front of the Daehan Gate was my stage and the tourists that came here were my audience.”

Although Ahn is grateful to continue at Daehan Gate, it’s a rough stage. In the winter weather, the guards face biting winds, and in the summer, the sun harasses them to no end. “In the hottest part of summer, we have to wear a three-layer Joseon-era military uniform and perform the ceremony,” said Ahn. “Every time, our uniforms become soaking wet.”

For the guards in the ceremony, being contract employees is also a point of contention. Their contract must be renewed yearly for a monthly salary of 1.5 million won. “One cannot exchange the pride of being the face of Korea for money,” said Ahn. However, when broaching the subject of family, Ahn held back tears. “I feel sorry for my two children and for my wife who suffered hardships by meeting such a rotten man. I will diligently work as chief gatekeeper for my family.”