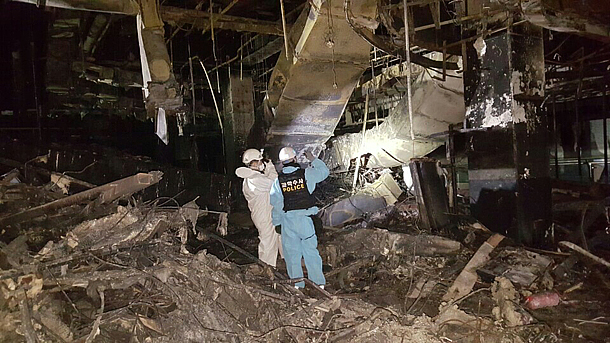 Police and firefighters on Sunday investigate the cause of a Saturday blaze at a children’s play zone in the Metropolis Mall Dongtan in Hwaseong, Gyeonggi, some 27 miles southeast from Seoul, which left four people dead. [YONHAP]

A fire broke out in an iconic residential-commercial complex in Hwaseong, Gyeonggi, on Saturday, killing four people and injuring nearly 50 others in what appears to be a construction site accident caused by a welding operation, local police said.

The blaze originated from a children’s play zone on the third floor of a commercial building in the Metropolis Mall Dongtan, the largest shopping mall in south Gyeonggi, which opened some 27 miles southeast from Seoul in December 2010.

Construction workers were demolishing the site when the fire erupted. No children were inside.

Two male workers were among the dead.

Two other women from a nearby skin care clinic were found dead when firefighters later scanned the building after the fire was extinguished. The clinic was located 33 feet away.

Authorities have yet to announce what caused their death or how the fire took place, but said the flames could have been due to botched welding work in the kids’ play zone, citing related equipment and a gas cylinder found at the spot.

A joint investigation was launched on Sunday morning by the police, fire department, National Forensic Service, Korea Gas Safety Corporation and Ministry of Employment and Labor.

The dead bodies were sent to forensic officials in the afternoon for an autopsy.

Details on the blaze will likely be revealed in two weeks, police said. Eight other workers who were at the scene will soon be summoned for questioning. Police will also review their work contracts to check whether anyone violated construction rules.

Around 30 fire trucks and 100 fire fighters were deployed.

At least 12 residents who were living nearby were hospitalized for smoke inhalation. Four to five people who were on the same third floor as the play zone had to evacuate by leaping off the building and landing on an air mat laid out by fire fighters.

Most of the injured are still struggling with complexities of smoke inhalation.

On his visit to the shopping mall Saturday, Gyeonggi Governor Nam Kyung-pil vowed to “do whatever the provincial government can do” to help everyone affected by the fire return back to normalcy, furthering that authorities will keenly investigate whether the building had any architectural loopholes.

At a size of 264 square meters (2,842 square feet), the kids’ play zone was completely burned down by the time firefighters contained the blaze, complicating investigations for police.

As to why the fire spread and couldn’t come under control earlier, an official on the investigation team said under the condition of anonymity that the highly combustible interior of the play zone, mostly made out of a spongy substance, could have been the case.

The area was said to have relied on the material because it was themed after a snowy village in which Pororo the Little Penguin, a popular animated character, lived.

Some residents who lived in the building linked with the play zone claim they didn’t hear the fire alarm early enough, or at all.

One dweller asserted he heard an alarm at 11:20 a.m., 20 minutes after the fire erupted, while another contended she heard an evacuation announcement much later at 11:40 a.m. When the JoongAng Ilbo called the apartment’s management office for confirmation, an official said he “cannot reply,” without further explanation.

Police are looking into the matter.