The fall of a marine nation

The fall of a marine nation 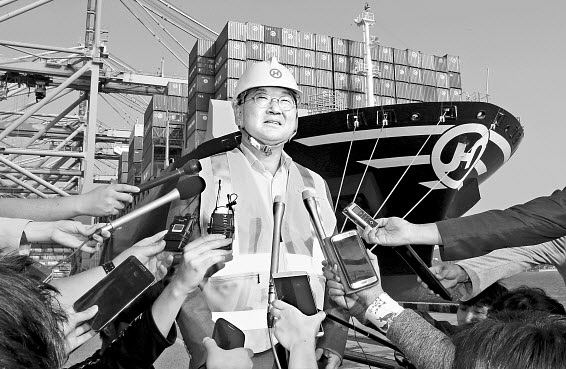 When I heard the bankruptcy of Hanjin Shipping, Korea’s biggest and the world’s seventh largest shipping company, I was reminded of Silla Rock in the sea near Ningbo, Zhejiang Province, a major trade port in China. You can see only about 100 meters (328 feet) of the rock, but it is as long as 300 meters under water. Because of the shape, many accidents occurred in the area, and locals called it Silla Rock because trade ships from the Silla Dynasty frequently struck the rock.

I visited the rock in 2009 while covering the maritime activities of Jang Bogo. Recent studies show that the Chonghaejin Garrison installed by Jang Bogo was not only a base to eradicate pirates but also a military-industrial-commerce complex that facilitated trade with China and Japan and built ships. Korea’s world-class shipbuilding and maritime shipping industries are the results of Jang Bogo’s genes.

Korea is a marine country surrounded by three seas located at the center of marine routes connecting the United States, Japan, China, Southeast Asia and Europe. But lately, the shipbuilding and marine transport industries are in trouble.

Hyundai Merchant Marine is already under the management of Korea Development Bank. Korean shipping companies that had once dominated the marine routes now wonder whether they can join the International Shipping Foundation.

Busan failed to rejoin the top five in the world in terms of container volume. Since it fell from fifth place in 2014, the port city has been working hard to rebound. Last year, Busan was ranked sixth after processing 19.43 million units of 20-feet containers. Shanghai, the busiest port last year, transported 37.09 million containers.

There are various reasons for the downfall of the shipbuilding and shipping sector. Hanjin’s former chairwoman Choi Eun-young lacked leadership and competency. Also, a decline was inevitable in a sluggish economy. However, if the companies had studied the global economy, executives had managed the company wisely and the government had provided proper assistance, municipal assemblymen wouldn’t have to protest the closure of the shipbuilding dock and the workers at partner companies wouldn’t have lost their jobs.

The shipbuilding and shipping sector has close relationships with other industries as they affect parts, food and beverage and even the divers who repair the ship. As an early presidential election is likely, candidates are competitively making election promises. The Park Geun-hye administration revived the Ministry of Ocean and Fisheries, but it did not establish proper marine policies. The ministry alone cannot make it possible, but the new administration must focus on reinforcing competitiveness of the industries so that Korea can become a marine power and logistics hub of Northeast Asia. The industries are faltering now, but if they fall completely, it would be really hard for them to get back on their feet.