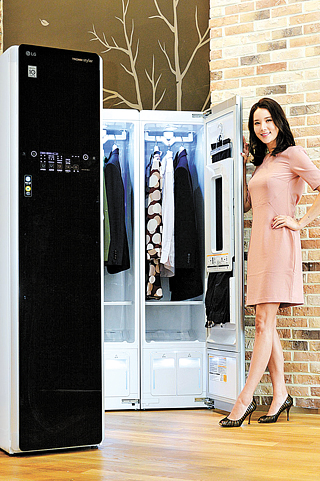 A model with LG Electronics’ Styler, which can cleans clothes in a closet. [LG ELECTRONICS]

Hang any item of clothing in a machine that looks like a closet and press a button. In 20 minutes, the clothes are clean, free of wrinkles and germs and ready to wear.

It sounds like magic, but the device is the Tromm Styler, which LG Electronics refers to as a “steam clothing care system.” The product is gathering steam in Korea as well as overseas six years after launch.

LG said it sold more than 10,000 Stylers in Korea in January, a record high that translates to one unit sold every four minutes. In one week last month, it sold 2,500 machines. Sales for the machine grew 60 percent last year from a year earlier.

The ongoing popularity of Styler is largely due to LG’s core technologies, the company explains - steam technology from washing machines, temperature control method from refrigerators and air current control and compressing technology from air-conditioners.

LG obtained some 160 patents while developing the product. The second-generation model, which was released in 2014, shrank 30 percent in size with less noise and enhanced energy efficiency. It is 185 centimeters high and 44.5 centimeters wide, fitting in a narrow space, and carries a price tag of 1.2 million ($1,055) to 1.4 million won.

When clothes are hung on the moving hanger, wrinkles drop as the hanger gently shakes it 220 times a minute. Its trademarked feature TrueSteam, which sprays fine water steam that is as small as one 1,600th of one water particle, helps reduce wrinkles, removes odors, sanitizes the fabric and even creases pants.

Even though the steam consists of 100 percent water with no chemical additives, allergens and bacteria are reduced up to 99.9 percent after use, LG says. The energy-efficient inverter compressor minimizes use of electricity.

The machine is most suitable for suits, blouses and uniforms that can’t be washed daily but need freshening.

Styler’s reception abroad is growing. Since introducing the device in China in 2012, LG has expanded into some 10 countries worldwide - including the United States, Canada, Germany and Russia.

“The LG Styler would be a wonderful amenity for a business traveler to find in his hotel room,” juror Barry Richards was quoted as saying.

Twice, a weekly magazine for professionals in the consumer electronics field, also gave its VIP Award for 2016 to Styler.