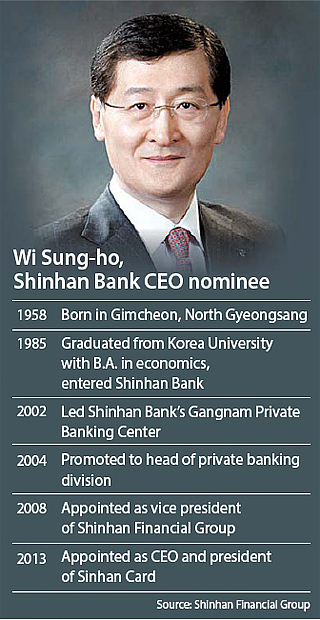 Wi Sung-ho, CEO of Shinhan Card, was nominated to head Shinhan Bank on Tuesday. He was the sole candidate for the post.

The 60-year-old candidate is considered to have a proven track record of leadership and management skills, but his past involvement in a leadership feud at Shinhan could be an obstacle.

“Wi has proven his excellent management skills throughout his term at Shinhan Card,” Shinhan Financial Group, the bank and card company’s holding unit, said in a statement Tuesday.

In particular, the group cited Wi’s role in expanding the company’s overseas business and digital services.

Wi will replace Cho Yong-byoung, who is leaving the post to take the helm of Shinhan Financial Group. Both men had vied for the position of group chairman last month, but Wi withdrew his candidacy during the final interview, saying it was proper for Cho to become chairman for the future of the company.

Wi took up the position of Shinhan Card CEO in 2013 under a two-year term. His tenure was extended twice after the company experienced solid earnings growth and began harnessing big data to develop card products.

Shinhan Card’s rising profit in recent years has cemented its position as the country’s largest card company. It posted 177.4 billion won ($154.7 million) in net profit in the third quarter last year, up 4.51 percent from a year earlier.

Although Wi’s nomination for CEO was widely expected, he faces some challenges. Earlier this month, the Korea Finance Consumer Association, a consumer advocacy group, filed a lawsuit against Wi on charges of perjury and subornation of perjury.

Wi was seen as a close aide to Ra.

The feud came to a close after all involved CEOs and the chairman resigned, but the case damaged Shinhan’s reputation.

Wi’s promotion has to be cleared by a nomination committee at Shinhan Financial Group and then shareholders.