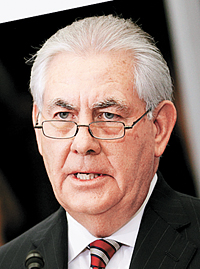 Korean Foreign Minister Yun Byung-se and new U.S. Secretary of State Rex Tillerson on Tuesday recognized North Korea’s nuclear program as an “immediate threat” and said it should be on the top of the agenda for upcoming bilateral talks.

In their first phone conversation Tuesday, the two top diplomats agreed to bolster the Korea-U.S. alliance to enable it to become the “strongest alliance to effectively respond to North Korea’s nuclear and missile provocations,” said the Ministry of Foreign Affairs in a statement.

Their phone conversation lasted for 25 minutes, and Tillerson went on to affirm Washington’s “steadfast” commitment to the mutual defense treaty with Korea, including continued extended deterrence, emphasizing that the Korea-U.S. alliance is key to peace and prosperity in the Asia-Pacific region.

The two also recognized that the bilateral alliance has been firmly maintained over some 60 years and that the current U.S. government plans to continue to strengthen it. To bolster the alliance, they said that it will be important to have a concrete strategy and an action plan.

President Trump made comments during his presidential campaign that Seoul should pay more for the maintenance of troops in Korea and suggested that Washington’s nuclear umbrella over the region may be pulled back.

Tillerson emphasized in the phone conversation that the North Korea issue will be at the top of the agenda in their upcoming foreign ministerial dialogue later this month.

The former Exxon Mobil CEO was confirmed on Feb. 1 by the U.S. Senate as President Donald Trump’s secretary of state with 56 votes for and 43 against.

“The phone conversation today had a relaxed atmosphere and focused on the direction of advancing the Korea-U.S. alliance in the future and cooperation on the North Korea issue,” said Cho June-hyuck, spokesman of the Foreign Ministry, in a Tuesday briefing.

The two sides also confirmed that the U.S.-led Terminal High Altitude Area Defense, or Thaad, system will be deployed to Korea as planned.

They added it is a defense measure to respond to Pyongyang’s threats and that it “will not harm another country’s interests.” China and Russia have protested the deployment of a Thaad battery to Korea, saying it is against their strategic interests.

Cho added, “Secretary Tillerson said he will closely cooperate with Minister Yun, who has acquired long experience and knowledge in the foreign affairs and security field, in order to bolster the Korea-U.S. alliance.”

Tillerson and Yun also discussed advancing a joint approach to tackling the North Korean nuclear issue amid ongoing sanctions and encourage Beijing to step up pressure on Pyongyang.

The two also confirmed that there will be various mechanisms for high-level consultations including the first Extended Deterrence Strategy and Consultation Group (EDSCG), which held its inaugural meeting in Washington last December.

Through the meeting, Washington agreed to regularly deploy its strategic military assets to Korea as a response to Pyongyang’s nuclear and missile threats.

The phone conversation between the top followed a visit by U.S. Secretary of Defense James Mattis last Thursday and Friday to Seoul, the new Pentagon chief’s first overseas destination. From Seoul, Mattis went to Tokyo.

The Foreign Ministry pointed out that the phone call and Mattis’ visit last week “represents the importance that the current U.S. administration places on the Korea-U.S. alliance.”

The phone conversation came at the request of Seoul.

Speaking about Iran’s ballistic missile test on Jan. 29, which prompted Washington to impose new sanctions on Tehran, Yun pointed out the dangers of North Korea’s missile technology, calling it “even more serious.”

Tillerson agreed and said that they were currently at a “critical junction.”

The secretary of state also conveyed to Yun that he is aware that the foreign minister has “long experience” with dealing with North Korean affairs and that he would like to meet him face-to-face, said a foreign affairs official.

Cho confirmed that the two sides are “taking into consideration the international conferences held in Germany in February” for the bilateral foreign ministers’ meeting.

Following a bilateral foreign minsters’ meeting, there is expected to be increased traction in discussing the Pyongyang nuclear issue including a meeting between the U.S., South Korean and Japanese envoys to the six-party talks, as well as other senior-level dialogues.