Farm close to Seoul is hit with foot and mouth

Farm close to Seoul is hit with foot and mouth 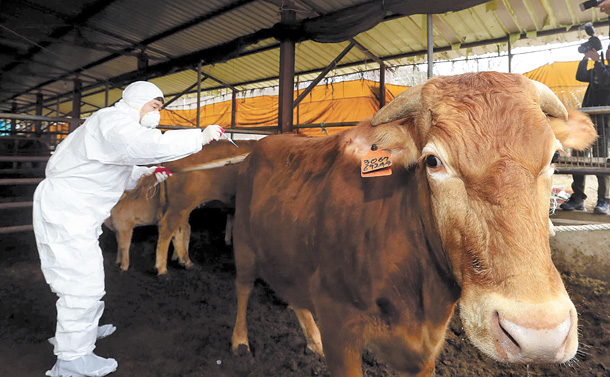 A quarantine official vaccinates cows against foot-and-mouth disease at a cattle farm in Gwangju on Wednesday as the deadly infectious disease affecting hoofed animals broke out in Yeoncheon County, Gyeonggi, on Wednesday, after outbreaks in Boeun, North Chungcheong and Jeongeup, North Jeolla. [YONHAP]

Despite a 30-hour lockdown of cattle farms nationwide, a third was hit by foot-and-mouth disease on Wednesday.

The farm is in Yeoncheon County, Gyeonggi, making it the first in the greater Seoul area to be affected in this year’s outbreak.

The Gyeonggi provincial government received a report from the farm at 10:40 a.m. saying 10 dairy cows were showing symptoms, including constant drooling and blisters.

The government has started to dispose of 114 dairy cows on the farm to prevent the spread of the disease to other farms.

There are 19 farms in a 3 kilometer (1.8 mile) radius of the Yeoncheon farm, with 529 livestock being raised, including pigs.

The government is investigating the travel history of the farmers and farmhands in Boeun. It has been reported that the farmer and his son traveled to Russia, China and Vietnam, where type O foot-and-mouth disease is common.

The last time Gyeonggi was infected with the disease was in April 2015 and the province ended up burying over 40,000 livestock from 56 farms in eight counties. During the country’s worst outbreak of the disease in the winter of 2010 and 2011, Gyeonggi buried over 1.74 million livestock, which is more than half of the total 3 million that were culled in that outbreak. Today Yeoncheon is raising 130,000 livestock at 588 farms.

The latest outbreak came after the government ordered a nationwide travel ban of all cattle farm and related businesses on Monday and the vaccination of over 3 million cattle.

The outbreak is starting to take a toll. The agricultural cooperative Nonghyup on Wednesday said it will temporarily suspend 86 livestock trading markets through Feb. 20. It takes a week for vaccinated livestock to form antibodies.

There are also concerns that the outbreak could result in raising the price of meat after egg prices skyrocketed earlier due to the spread of bird flu.