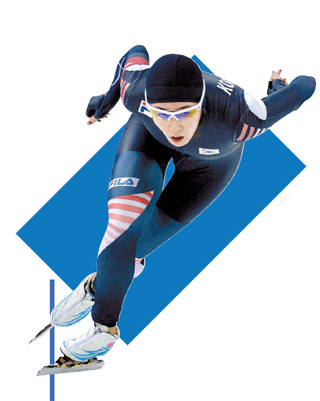 Korean speed skater Lee Sang-hwa is no stranger when it comes to the Olympics. After all, she was the first Asian female skater to top the 500-meter speed skating event during the 2010 Vancouver Olympics at the age of 20.

Lee then went on to defend her title in 2014 during the Sochi Olympics by adding another gold to her shelf.

Now, the two-time Olympic gold medalist looks to the 2018 PyeongChang Games right here on her home soil, preparing herself for what is likely to be the last Winter Games of her decorated career.

But before she heads to the Olympics, her journey starts today at the International Skating Union (ISU) World Single Distances Speed Skating Championships in the Gangneung Oval in Gangneung, Gangwon, which doubles as a test event for the 2018 Games.

“This competition will be a battle against myself,” said Lee. “I have not set a goal on record or ranking. No one is yet to compete here since this is a newly built facility.”

Lee, who also holds a world record in the 500-meter event at 36.36 seconds, has been battling a knee injury for the past few years and has yet to clinch a victory from the ISU Championships this season.

Although she didn’t shy away from participating this season, she was shut down by competitors such as Nao Kodaira of Japan every time. So far, Lee has raked in two silvers and one bronze while Kodaira, a 31-year-old veteran, has tallied three golds.

Still, Lee is not worried. Rather, skaters such as Kodaira are motivation for Lee to push forward yet another year.

“After the Sochi Olympics, there was pressure that I was someone who had to win a medal,” Lee said. “This was especially the case during the ISU World Cup that took place in Seoul after Sochi. In comparison to then, I feel a lot more at peace. With other skaters ascending to the top, I ended up with second or third. But I find it rather exciting being a pursuer than a leader. It’s fun trying to catch up.”

Her last Olympics will be more about enjoying the big stage rather than being on edge trying to climb the podium. “Many foreign media outlets have asked me about the possibility of winning an Olympic medal at home,” she explained. “I have two medals already and I am not going to be greedy this time around.”