LG breaks ground on a corporate campus in New Jersey

LG breaks ground on a corporate campus in New Jersey 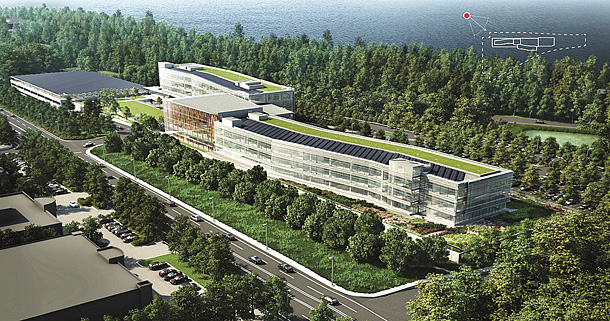 LG Electronics broke ground on a North American headquarters in New Jersey set for completion in 2019. The site will encompass two buildings on a 110,000-square-meter plot. [LG ELECTRONICS]

The consumer electronics giant is spending 300 billion won ($261.5 million) to construct two buildings - a five-story north wing and a four-story south wing - on a 110,000-square-meter (27-acre) plot in Englewood Cliffs.

LG has been working on the project since 2009 and obtained final approval from local authorities last June, which indicates the plan is not inspired by the need to go along with U.S. President Donald Trump’s “America First” campaign.

Still, LG says it will contribute significantly to the local economic and tax base - an estimated $26 million annually in direct and indirect recurring revenues as well as creating thousands of local jobs.

The project will allow LG to double its local employment to more than 1,000 by 2019 and create more than 2,000 construction jobs in the shorter term.

“Englewood Cliffs has been home to LG in the United States for 30 years, and now we look ahead to the next 30 years and beyond with a world-class corporate campus that will support LG’s growth and our commitment to being a good corporate citizen focused on the environment,” said William Cho, CEO of LG Electronics North America.

The new campus will bring together employees dispersed across the state at LG Electronics’ affiliates such as LG Household and Health Care and LG CNS.

The site has been designed to protect the scenic views of its surroundings such as forest and wetlands. Planting 1,500 trees on the campus will raise the portion of green space to above 50 percent of the entire site. Each building will have solar panels to generate clean energy.

North America is a crucial market for LG: 30 percent of its global revenue came from the region in the first nine months of last year.

LG has been aiming at the high-end white goods market in the region on the back of its Signature brand that includes built-in kitchen appliances under the Signature Kitchen Suite lineup and organic light-emitting diode TVs.