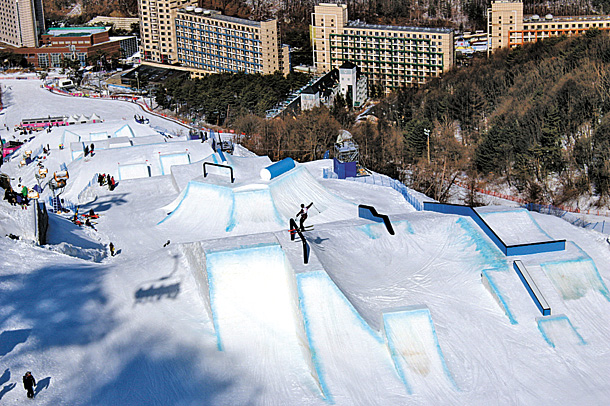 Phoenix Snow Park completed its cross and slopestyle courses last year, and four more courses have been finished this year. Test events ahead of the 2018 PyeongChang Olympics will begin on Friday. [Phoenix Snow Park]

When the PyeongChang Winter Olympics kick off next year, the main stage will be Phoenix Snow Park, where nine events including freestyle skiing and snowboarding will take place. Last year, the park finished construction of its cross and slopestyle courses. This year, four slopes — for the mogul, aerial, parallel giant slalom and half-pipe events — have been completed, and test events in preparation for the Olympics will begin on Friday.

The test events are an exciting opportunity to watch the world’s top athletes compete before the Winter Games next year. They include the FIS Freestyle Skiing World Cup from Feb. 10 to 19 and the FIS Snowboard World Cup from Feb. 12 to 19. Both competitions will take place at Phoenix Snow Park, which has been designated as the Olympic Stadium for the 2018 Games.

The Freestyle Skiing World Cup will have six events including aerial, mogul, and half-pipe. Spectators will get to see athletes racing downhill and performing tricks like aerial flips and jumps.

Over 600 people, including 300 contestants and executives from 15 countries, are participating in the test events. Of note are top Korean snowboarders Lee Sang-ho and Lee Kwang-ki as well as Korean-American sensation Chloe Kim, whose top performance at the 2015 Winter X Games made her the youngest gold medalist at the time.

Anyone can watch the test events without having to buy a ticket. Spectators at Phoenix Snow Park will also have the chance to participate in pep rallies. The White Tigers, the official celebrity cheering squad of the Olympics, will be on hand to perform and cheer for the Korean national team.
After the test events, spectators, too, can experience the Olympic courses. Before the Winter Games next year, the venue will be open to the public, giving people a taste of the cross, mogul, half-pipe and parallel giant slalom courses that professional athletes will soon be taking on for the world’s biggest winter sports competition.

Phoenix Snow Park is hosting other events to celebrate the run-up to the Winter Olympics. On Friday at 1 p.m., it will host a contest called “Catch the 20.18 second!” The winner must ski or snowboard from the top of the slope to the gate in a time closest to 20.18 seconds. First prize is a season ticket to the park with accommodations. The top 10 will also receive prizes such as lift tickets and water park tickets. Those interested in competing should send an email to kwon.dayoung@phoenixhnr.co.kr.