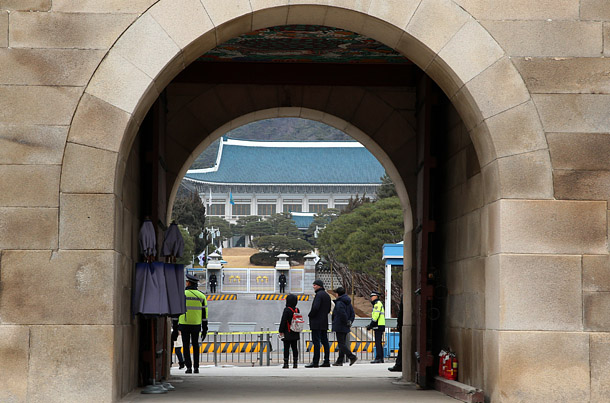 Tourists gaze at the Blue House from Gyeongbok Palace in Seoul on Wednesday. The Blue House has kept silent on calls to extend the investigation period of an independent counsel investigating the president on abuse of power allegations. [CHO MUN-GYU]

A showdown between the Blue House and independent counsel Park Young-soo started Wednesday over a planned questioning of the president about corruption and abuse of power allegations.

If it takes place, it will be the first face-to-face questioning of an incumbent president in a criminal investigation in Korean history.

Park was impeached by the National Assembly in December, suspended from the presidency, and is undergoing trial in the Constitutional Court on whether she should be removed from office.

Following the SBS report, Blue House officials loudly complained that the independent counsel leaked information and local media reported that Park aides were threatening a boycott of the questioning by the president as a result. They said the independent counsel’s media strategy was intended to smear Park’s image.

“We were almost at the final stage of negotiations with the independent counsel to arrange the questioning, but they broke the deal, starting with the leak of the date,” a Park aide was quoted as saying by Yonhap News Agency. “We are extremely upset that the counsel made continuous leaks to some media. Distrust is so high that we must stop talking to the independent counsel.”

Park’s lawyer, Yoo Young-ha, made a protest to the independent counsel Tuesday night.

The independent counsel team reacted with extreme caution in fear of losing the chance to question the president. After the SBS report was aired, the team made clear that the leak didn’t come from it.

On Tuesday, Lee freely discussed the team’s plan. “We first said we want the questioning of the president in early February,” Lee said. “That would be up until Feb. 10. We expect that the questioning can take place around that time.”

During Wednesday’s media briefing, Lee was asked if the independent counsel considers the Blue House’s demand to keep the date secret unfair. “I will tell you everything next time, including the fairness issue,” he said.

Asked if Park will be questioned as a suspect, Lee said, “I will say that after the questioning takes place.”

Journalists pointed out that the law governing the independent counsel allows media briefings on the progress of the investigation unless it did not make public the charges against a suspect. “We understand,” Lee said. “But there is a circumstance that I can not disclose right now.”

Since it launched its probe on Dec. 21, 2016, the independent counsel team repeatedly stressed the need to question Park in person. She has been named a co-conspirator in allegations that she received bribes through her friend Choi Soon-sil from Samsung. She was also accused of ordering the government to create a blacklist to cut funding to liberal artists.

The independent counsel also wants to question Park about her whereabouts and actions during the crucial early hours of the Sewol ferry’s sinking on April 16, 2014. More than 300 people died in the accident, while the government rescue operation was delayed. Park has been accused of nonfeasance.

The counsel also wants to question Park about suspicions that she received unlawful medical treatments from doctors outside the Blue House.

Park has denied all the charges against her. Her latest rejection came last month when she gave an exclusive interview to a conservative Internet TV show.

She already broke her own promise from last year that she would cooperate with prosecutors’ investigation of similar abuse of power and corruption charges.