Despite protests, Kim says he will not run for president

Despite protests, Kim says he will not run for president 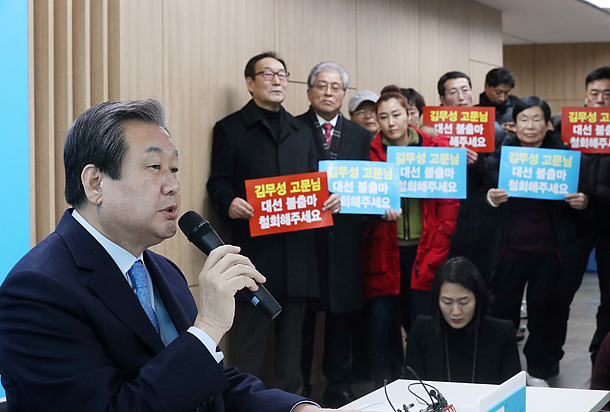 Rep. Kim Moo-sung of the Bareun Party, left, tells reporters on Wednesday at the party headquarters in Yeouido, western Seoul, that he will not retract his decision not to run for president even though he has been receiving a lot of requests to do so. [YONHAP]

Rep. Kim Moo-sung of the Bareun Party reiterated that he would not run in the presidential election amid rising calls that he should declare his bid to give more energy to the party primary.

Kim, former Saenuri chairman, declared November that he would forsake his bid to take responsibility for an unprecedented abuse of power scandal that led to President Park Geun-hye’s impeachment. But calls have been rising in his party for him to backpedal on his decision last year not to join the primary race, as Bareun is struggling to win public support and its presidential contender Yoo Seong-min is suffering single-digit approval rates.

“I have been receiving a lot of requests to reverse my decision,” Kim told reporters on Wednesday at the party headquarters in Yeouido, western Seoul. “But making such a reversal as a politician who had made the decision before the people is a challenging task to do. I have no plan to change my mind.”

Kim then called on all political forces outside those behind Park Geun-hye and Moon Jae-in of the Democratic Party to come together to field a single unified candidate to stop liberals from taking power in the all-important election, which can take place as early as spring pending the Constitutional Court’s decision to remove President Park from power.

Demands that Kim switch his position and begin his journey to the Blue House have been increasing following former UN Secretary General Ban Ki-moon’s abrupt decision to drop out of the race on Feb. 1. Much of Ban’s support, which came from conservative voters, appears to have gone to Prime Minister Hwang Kyo-ahn, who is acting president, as evidenced by a sudden increase in Hwang’s approval ratings in recent polls.

Yoo has failed to draw on those who supported Ban, leaving his approval rating at less than 5 percent.

Observers attribute Yoo’s failure to do so to complaints held by conservatives that he is not conservative enough and his economic policies are too progressive. Those in the Bareun Party hope that Kim Moo-sung could offset what Yoo is lacking since he has an image as a more conservative politician who is tough on North Korea.

In the latest poll by R&Search, Yoo came in sixth with 4.9 percent. Frontrunner Moon Jae-in garnered 36.9 percent followed by South Chungcheong Governor An Hee-jung with 15.4 and Prime Minister Hwang with 13.6 percent. The Bareun Party is also struggling with its approval. While it at one point received more support than the ruling Saenuri when it was in the making last month, its approval rating is now eclipsed by the Saenuri with 11.6 to Bareun’s 6.8 in the poll, adding more pressure on Kim Moo-sung to retract his decision and run.