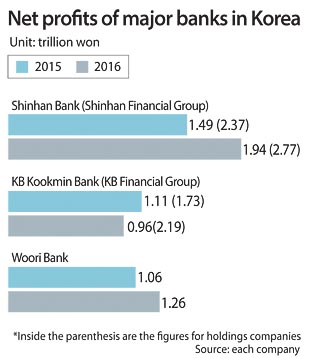 Korean banks and their holding companies announced their net profit for 2016 this week, many of them increasing their numbers.

Shinhan Financial Group saw its net profit soar more than 15 percent, led by the earnings of Shinhan Bank as well as other subsidiaries such as Shinhan Card, despite the Bank of Korea’s decision to lower the key interest rate midyear. Market consensus attributed the rise in mortgage loans to the industry-wide rise in earnings as banks profited from interest income. Many analysts speculate that the pace will continue this year.

The holdings company’s major subsidiary Shinhan Bank led the rise with its net profit catapulting more than 30 percent to 1.94 trillion won. Shinhan Card’s net profit reached 715 billion won while Shinhan Investment’s profit fell nearly 50 percent to 115 billion won. Shinhan Group’s return on equity, which shows the profitability of a company in relation to the investment by its shareholders, improved 1.1 percentage points to 9.15 percent in 2016.

“Woori’s impairment on credit loss has improved in 2016,” said Eun Kyung-wan, an analyst at Meritz Securities. “Before it was privatized, the bank was exposed to all kinds of events such as that involving Daewoo Shipbuilding and Marine Engineering and the government’s bailout plan.”

Regarding the trend, Eun said, “The growth of mortgage loans meant the growth of interest income for the banks in Korea. With the government policies attempting to curb rising household debt and cool down the local real estate market, the size of mortgage loans in 2017 will shrink but this just means not as many new loans will be issued. The banks will continue to rake in income from the interest of the loans they have issued already.”

Kim Jae-woo, an analyst from Samsung Securities, said that Shinhan Group’s performance improved not just because of interest income, which jumped by 512 billion won in 2016, but because of one-shot factors such as corporate tax and gains on disposal of Visa card shares.