How sweet it is: Candy imports hit record high

How sweet it is: Candy imports hit record high 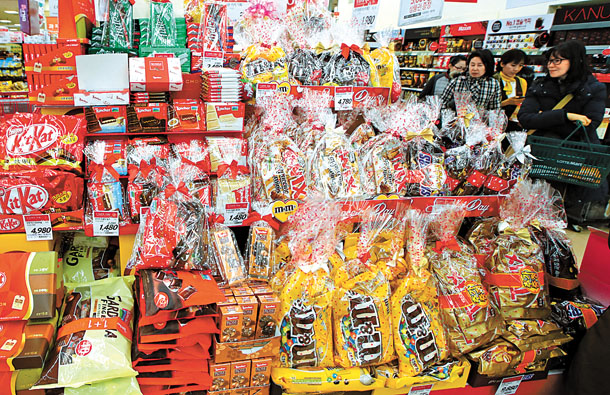 The amount of imports has been increasing continuously since 2010, the government agency said, with particular bumps each year between September and February during gift-giving holidays like Christmas and Valentine’s Day.

Imports of chocolate products alone rose 4.3 percent to $220 million, and the figure for other candies rose 16.1 percent to $153 million. The government added that their imports increased by 54.2 percent when compared to five years ago. 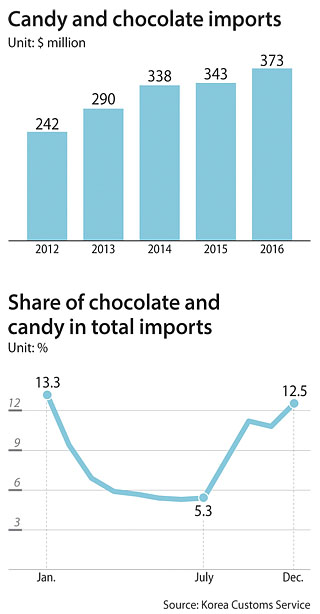 The United States was the biggest exporter of chocolate products to Korea, accounting for 17.4 percent of all chocolate imports. This was followed by Italy with 12.5 percent and China with 12.3 percent. The customs agency said chocolate imports from China jumped 548 percent when compared to 2012 due to relatively low prices.

In terms of candy, the biggest exporter was Germany, accounting for 30.9 percent of imports, followed by China at 14 percent and Vietnam at 13.9 percent. Germany overtook all countries to become the biggest exporter to Korea in 2015. “German gummy candies remain very popular in the country,” said Kim Yoon-sik, a director at the customs agency. Haribo gummy bears are a particularly popular product in Korea.

Other data showed that more men in Korea are buying chocolates as gifts for Valentine’s Day, an unusual recent trend considering that in Korea, Valentine’s Day has traditionally been a day when women buy gifts for their male partners. Men, in turn, are said to give women candy one month later on March 14, on a holiday known as White Day.