‘We must turn our rage into positive energy’

‘We must turn our rage into positive energy’ 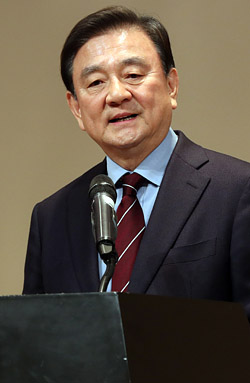 Hong Seok-hyun, chairman of the JoongAng Ilbo and JTBC, gives a lecture to officials of the Educational Foundation Wonkwang School on Thursday. [KANG JUNG-HYUN]

BUAN, North Jeolla - Hong Seok-hyun, chairman of the JoongAng Ilbo and JTBC, said Thursday the public must transform their rage toward the establishment into positive energy to renew the country.

“Now we are on the eve of a typhoon, but it is also a golden opportunity to unite everyone’s power to renovate the country,” Hong said, in his special lecture on Thursday. He addressed about 240 officials of the Educational Foundation Wonkwang School on Thursday at the Daemyung Resort in Byeonsan.

“Rage is important, but there is a saying that the next day after we showed rage is more important,” he said. “We must transform the passion from the rage to energy of mutual prosperity as soon as possible in order to build a new country.”

During his lecture, Hong stressed the importance of listening to various opinions courteously and attentively. “Through the Reset Korea project of the JoongAng Ilbo and JTBC and through meetings of many scholars and experts, I listen to various opinions,” Hong said, and shared his 10 hopes for the country that he complied from their opinions.

Among the 10 hopes, Hong stressed the importance of the responsible action of political leaders, including presidential contenders. He said critical bills must be passed during the February and March legislative sessions, separately from the ongoing political turmoil surrounding the presidential impeachment and the possible early election.

“They must show political power to realize some plans to lift regulations on the new industries and develop them to prepare for the fourth industrial revolution,” Hong said.

“There were also many opinions that the national system must be set right by achieving grand unity through a constitutional amendment and a grand coalition,” he said.

He also said the president, political parties and politicians must surrender some of their powers. The Blue House’s reclusive system must be changed for better communication with the public and the president and aides must work closely in the same space.

Hong also stressed the importance of unification and the need for an inter-Korean summit.

Society must overcome the middle-income trap and social division, he said, adding that the country also needs to resolve its lack of trust, an important social capital for advancement.

“We must fear the middle-income trap,” he stressed. “The country will become a developing society again when it fails to cross the bar to become an advanced country. The generation of our children will live a poorer life than their fathers. Unfairness, inequality and uncertainty will produce distrust, dissatisfaction and insecurity. It is a challenge that we must resolve as soon as possible.”