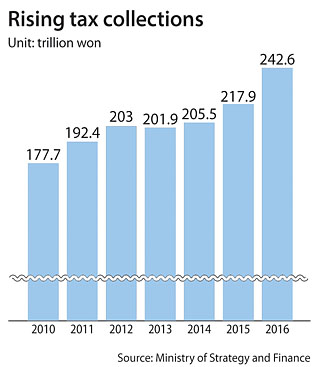 Even though the country’s economy remains stagnant, the government’s tax collection last year was about 10 trillion won more than it expected.

The government’s tax collection posted a deficit when compared to the budget spent for the third consecutive year starting from 2012. It swung to a surplus in 2015 and has continued in a surplus for the last two years.

Last year, the government’s yearly target for taxes was 232.7 trillion won. It collected 9.8 trillion won more than they expected. The government raised its target to execute a supplementary budget worth some 10 trillion won to boost the sluggish labor market and companies undergoing turnaround plans.

“The tax revenue rose largely due to rise in corporate taxes as companies have become more profitable, while the real estate market has rebounded as well,” said Baek Byung-gap, a director at the Finance Ministry.

“We tried to avoid running into a deficit last year by setting the target amount more conservatively earlier last year considering the supplementary budget. We thought the tax revenue in the second half of the year would drop but it didn’t happen.”

Income taxes rose from 60.7 trillion won in 2015 to 68.5 trillion won last year as well largely thanks to the boom in the real estate market, more number of workers and increased wages in general, the government said.

Income taxes of workers rose 3.9 trillion when compared to the previous year as average wages for full-time workers at companies with more than five employees rose 4 percent year on year to 3.37 million won. The number of full time workers in the country also increased from 12.6 million to 12.9 million.

Transfer taxes collected by the government rose 1.8 trillion won from the previous year, as there were more housing transactions in the Seoul metropolitan area, which tends to be more expensive than other regions, last year, while nationwide housing prices rose as well.

Tax collection on customs duties, on the other hand, dropped 0.5 trillion won in 2016 from a year ago as Korea imported fewer goods from abroad last year.