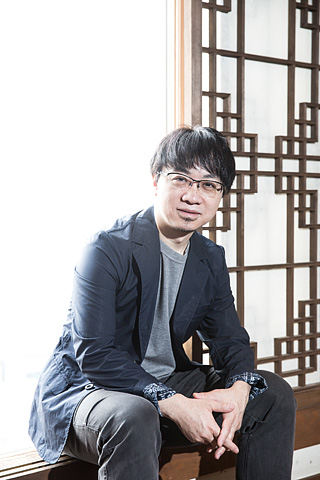 Makoto Shinkai, director of “Your Name,” held a press conference in Korea on Friday to celebrate the three million tickets sold for his film “Your Name.” [STUDIO 706]

On his second visit to Korea, Makoto Shinkai, director of the megahit “Your Name,” repeatedly expressed gratitude to Korean fans’ love for the film, which became the best-selling Japanese animation ever released in the country.

“I came to Korea a month ago, when it just hit theaters,” said Shinkai at the press conference held in Gangnam, southern Seoul, on Friday. “Though I had hoped many people would enjoy the film, I never thought my hope would be realized. I’m very glad that it did.”

“Your Name,” which became the highest-selling Japanese animated film in Korea late last month, shoving aside Hayao Miyazaki’s longstanding 2004 hit “Howl’s Moving Castle,” has sold more than 3.58 million tickets as of Thursday. It also became the highest-grossing Japanese animated film in history, making $317.9 million in profit as of Wednesday. Though Shinkai has long had his own group of devoted fans, “Your Name” is his first movie to achieve commercial success after his previous animations, including “The Garden of Words” (2013) and “5 Centimeters Per Second” (2007).

Despite ticket sales, however, Shinkai doubted whether many had actually watched the film, since “Your Name” is well-known for its fervent fans that go to theaters to watch the film over and over again.

“When I met with Korean audiences yesterday at the film event, around 90 percent of attendees seemed to have watched the animation more than three times. There were some who said that they watched it more than 10 times while there was also a person who said to have watched it more than 50 times. So the actual number of people that watched my film might be less than one million. But I truly feel happy regardless.”

Regarding the animation’s particular popularity among teenagers, the director said, “I was actually asked by a Korean fan about how I know so much about teenagers’ feelings. Though people gradually start to forget how they felt when they were teenagers, some feelings they had when younger still linger in their hearts. And I wrote the script trying to remember those feelings I had when I was in middle and high schools. I’m thankful that young people today can sympathize with the feelings I had more than 20 years ago.”

“I made ‘Your Name,’ hoping to give hope to youth,” said Shinkai about its core message. “Through the film, I wanted to deliver a message that there might be someone who you haven’t met yet but will grow very important to you. So, who you encounter tomorrow may become your destiny.”

Shinkai continued, “I know some viewers relate the film with the 2011 Great East Japan Earthquake and Sewol ferry tragedy [in 2014 that killed more than 300]. If people feel hope to make a better future, that will be more than what I had hoped for my film to do.”

The director revealed his desire to work with boy band SHINee to make music for a movie.

“When I came to Korea [last month], I met Jonghyun from SHINee and I found him really cool. Ever since, I thought it would be great to work with SHINee, but I know it is merely my delusion.”

Regarding his next work, Shinkai said he is still working on some ideas.

“I’m still devising my next film. Though nothing specific has been determined, I think it will be a commercial film since ‘Your Name’ had a lot of viewers, especially among young audiences. I want to test myself to see whether I can achieve a box office hit as successful as ‘Your Name’ with my next work.”

Meanwhile, the Korean dubbed “Your Name” version is scheduled to hit theaters in the second half of this year.