Loud pickets are not the answer

Loud pickets are not the answer 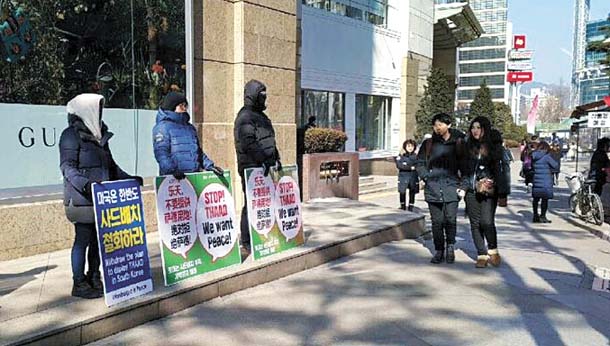 Every day, about a dozen protesters gather outside Lotte Department Store in Sogong-dong, central Seoul, with signs reading “Lotte must not provide site for Thaad” in Korean, English and Chinese. The protesters are members of a group called National Action for Peace Calling for Withdrawal of Thaad Deployment, which is against the controversial missile defense system that the United States plans to deploy.

Many tourists who see the protest stop to read the signs. On Feb. 8, a 41-year-old Chinese tourist surnamed Wang visiting Lotte Duty Free asked me, “I know what Thaad is in general but not the details. Is Lotte promoting Thaad deployment?”

I explained that the site where Thaad will be deployed, the Seongju Golf Course in North Gyeongsang, is owned by Lotte, and the company is in the process of selling the site to Korea’s Ministry of National Defense.

Wang was puzzled. “It is something that the Chinese and Korean governments should resolve,” he said. “Lotte shouldn’t be blamed. As a Chinese person, I oppose Thaad deployment, but I don’t want to see protests while sightseeing in Korea.”

Lotte is uncomfortable with the protest. Because organizers have obtained permission from the police to hold their rally, Lotte has no way of stopping them. The company is anxious that Chinese tourists might conclude from the protest that Lotte supports Thaad.

It was inevitable that Lotte would eventually give up its golf course for Thaad. When the government was selecting a site for the missile defense system, it was difficult for the company to refuse. A source at Lotte said, “Frankly, how can the government and Lotte have equal position in negotiations? Lotte didn’t volunteer to provide the site.”

When the Thaad controversy started at the end of last year, the Chinese government launched a tax probe and conducted safety inspections of Lotte operations in China. A 3 trillion won ($2.6 billion) construction project in the northeastern city Shenyang was suspended.

Picketing outside a business is one nonviolent way to express opinions. But should protesters blame a specific company for collaborating with the government on Thaad, and with Chinese signs at a location frequented by Chinese tourists? The method is rough. They should understand that picketing could result in misunderstanding and discomfort.


*The author is an industrial news reporter at the JoongAng Ilbo.