Rallies for and against Park scheduled to brave freezing temperatures

Rallies for and against Park scheduled to brave freezing temperatures 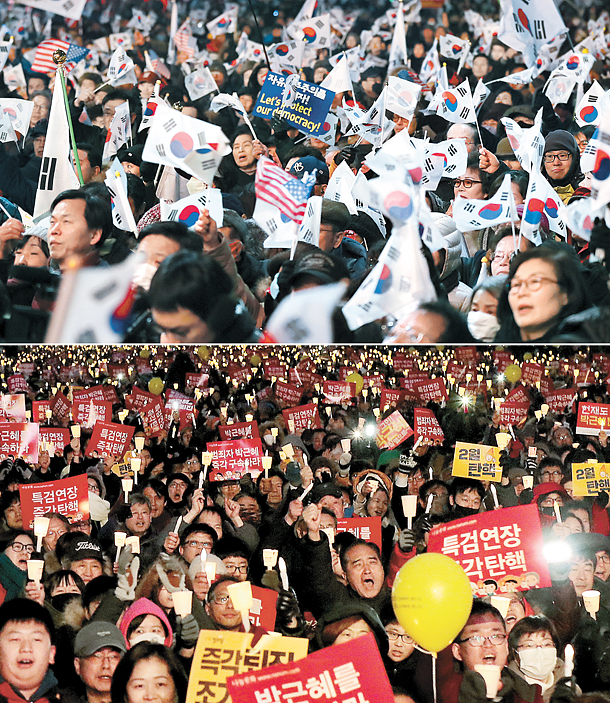 Another massive street rally calling for the Constitutional Court to remove President Park Geun-hye will take place today in Gwanghwamun Square, central Seoul, and nationwide, despite forecasts that temperatures will drop to minus five degrees Celsius (23 degrees Fahrenheit).

Park loyalists in the ruling Saenuri party, which tentatively renamed itself the Liberty Korea Party (LKP), will attend the protest to display their loyalty for the president, who is now on the brink of being forced from office. Lawmakers Kim Jin-tae and Yoon Sang-hyun are among the expected attendees.

The anti-impeachment group is expected to play a song demanding the imposition of martial law to clamp down on Park opponents.

The 15th weekend vigil protest against the embattled president is expected to draw as many as 1 million, according to an organizer, who are expected to march 15.7 kilometers (9.8 miles) from Daechi-dong, Gangnam District, where the independent counsel’s headquarters are located, to Gwanghwamun Square at 3 p.m.

As during previous rallies, participants will encircle the Blue House by filling the streets around the presidential office. Organizers will also guide demonstrators to the Constitutional Court to deliver their message.

Presidential hopefuls will appear at the rallies, as the court is thought to be drawing close to its judgement. Expectations are high that the court will deliver its ruling before March 13, when Justice Lee Jung-mi is scheduled to retire.

Frontrunner Moon Jae-in and Seongnam Mayor Lee Jae-myung, both Democrats, plan to attend the Gwanghwamun rally while South Chungcheong Governor An Hee-jung is scheduled to show up at a rally in Gwangju.

Attendance by major political figures comes amid a growing sense of urgency among the opposition bloc that a clear message should be sent to the Constitutional Court by massive rallies that the people want President Park out of office.
Reflecting on this sense of alarm, Moon asked people to join weekend allies in a JTBC discussion program aired on Thursday.

Rep. Ahn Cheol-soo of the People’s Party stated he would not take part in street rallies, saying it was best to leave the matter up to the Constitutional Court to decide on the motion rather than join the rally, which could be seen as exerting pressure on the court.