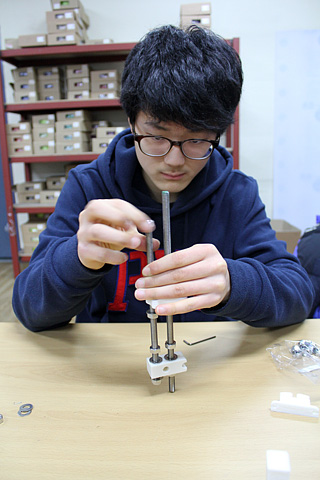 When 16-year-old Lee Hae-chan was in middle school, his envy was palpable when he watched the movie “The Dark Knight,” his mouth agape at the sight of Batman flying around in a glider. The next day, he went to the neighborhood library, found books concerning hang gliders, and drew up blueprints. He handed over the blueprints to Lee Gwang-hae, his father, and said, “Dad, I want to make a hang glider.”

If there was something Lee wanted or needed, his first thought was “How can I make this?” Being unsatisfied with his cellphone battery draining quickly, he looked for a solution in solar-powered chargers. During his winter vacation in the seventh grade, he bought parts from overseas and made a 3-D printer.

“If one just reads up, a person can make a simple 3-D printer,” explained Lee. Based on his personal experience, Lee published a book, “Making a 3-D printer by Oneself for Elementary, Middle and High School Students,” early this year.

He loved Legos since kindergarten, and so Lee enjoyed classes in school that involving assembling the most. If there was something he wanted to make, he sifted through library books, referenced YouTube videos and drew up elaborate blueprints. His parents quietly helped him.

“My parents would always ask ‘What would you most like to do?’ and supported me, sparing no effort,” said Lee. When he wanted to craft a weapon that caught his eye from a computer game in the fourth grade, his parents gave him the needed tools.

After Lee continued asking to see the process of melting metal, he and his family went to a blacksmith for themselves. Unlike nearly all his age peers, he barely attended any academies. Lee’s parents entered him in academies several times, but he quickly quit them.

“In seventh grade, I wanted to attend a science high school so I enrolled in an academy, but they were all kids who had curriculum acceleration and were studying hard,” said Lee. “I told my dad, ‘I don’t want to live this way,’ and he told me to quit immediately.’”

According to Lee, his father said, “I felt some apprehension over the heavy emphasis on study by the parents around me. However, I thought finding a way for children to be happy is the parent’s responsibility.”

Even for Lee, a 3-D printer was a difficult challenge. “I became interested when I saw a documentary on 3-D printers on TV,” said Lee.

Since his summer vacation in the seventh grade, Lee started to study YouTube videos daily. Korean language videos were unavailable so he used an English dictionary throughout. At the time, there were a scant number of 3-D printer businesses in Korea and Lee spent his days learning what he could directly.

Seeing his son’s enthusiasm, Lee’s father purchased a 600,000 won ($519) or so 3-D printer accessory set. Lee referred back to his notes and wrestled with the components.

From his humble beginnings, Lee used the 3-D printer to manufacture a drone, entered a drone competition hosted by Korea University and won a participation award last October. He was the youngest prize winner.

Lee’s goal is to introduce 3-D printers to his friends and share their ideas. “Even though it looks difficult, I want to show that anyone can do it they start with a goal in mind,” said Lee. “If we do it together, we can have an even better result.”