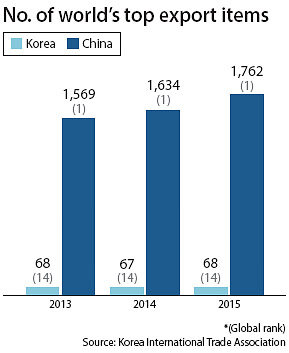 Korea remained steady in the number of its exports that have the largest market share globally from 2013 through 2015.

But China’s top products kept growing in that period and now account for almost one third of export categories, a recent report from the Institute for International Trade showed.

Korea had 68 export items that were No. 1 in the world in terms of market share in 2015, up by just one from 2014 and the same number as in 2013, according to the report from the institute, a think tank run by the Korea International Trade Association, based on UN Commodity Trade Statistics.

Twenty six items - from chemical goods to memory chips, automotive components and tankers - maintained the number one market share globally for five consecutive years through 2015. Eighteen new items including edible seaweed, photographic film and plastic products took up the No. 1 position in 2015, whereas 17 items such as storage batteries and propylene lost their top positions to other exporting countries.

Notably, China was the No. 2 producer of 17 out of Korea’s 68 No. 1 items - signifying that Korea could lose some of its top spots to China in coming years.

Korea competed in the chemical sector with the United States and against Germany and Japan in chemicals and steel products.

“Innovating exports to distinguish them from other export powerhouses and to raise their value is critical for Korea to beef up its No. 1 items,” said Kim Gun-woo, a researcher at the Institute for International Trade.

He noted that the Korean government and trade-related institutes should cope preemptively with external variants such as trade conflict between the United States and China, and Brexit in order for Korean exporters to minimize damage from ever-spreading uncertainties.

The report said the record indicates Korea has been expanding its base in the global market.