All quiet on the Kaesong front

All quiet on the Kaesong front 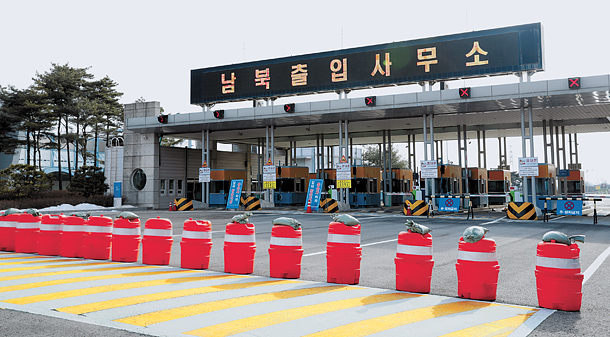 Roadblocks are set up in front of checkpoints for vehicles that travel to and from Kaesong, a year after the Kaesong Industrial Complex was shut down. [JANG JIN-YOUNG]

PAJU, Gyeonggi - The Dora Observatory in Paju, Gyeonggi, 28 kilometers (17 miles) northwest of Seoul, is one of the most boisterous spots near the military demarcation line, where both Koreas have been divided since the end of the war in 1953.

The upbeat melodies of K-pop penetrate the crisp air here, a result of South Korea’s propaganda campaign to punish Pyongyang for carrying out a fourth nuclear test on Jan. 6, 2016. Loud speakers blast the latest hits from the South, as well as announcements critical of the North Korean regime.

Located 548 feet above sea level, the observatory also boasts the best view of the North’s Kaesong Industrial Complex, 5.4 kilometers away, and downtown Kaesong, 7 kilometers away.

The only bad news for any tourist craving a rare glimpse into the reclusive country is that there’s nothing much to see now.

Last Friday marked the 365th day since Seoul temporarily shut down the joint economic project with Pyongyang in Kaesong, cutting off what was then the last remaining economic relationship between the two.

South Korea’s decision to pull the plug on Kaesong was laid out Feb. 10, 2016, a month after the North’s fourth nuclear test and three days following a long-range ballistic missile test. Unification Minister Hong Yong-pyo said the decision was intended to prevent a “catastrophic disaster,” that could entail Pyongyang’s enhancement of nuclear capabilities.

He said that South Korea’s financial injection into the complex was being misused for the North’s development of nuclear weapons and long-range missiles.

The unification chief added that Seoul was positioned to “take the lead” in the international community’s sanctions against the regime, by which he meant suspending the joint project would prove to the world, and especially Pyongyang, that South Korea was serious about punishing the North for its military provocations.

Last Tuesday, two JoongAng Ilbo reporters visited the Dora Observatory for a closer look into how the complex was faring after that symbolic move, which the South Korean government still calls “temporary.”

A recent panoramic view of Kaesong Industrial Complex, in which 123 South Korean companies ran their manufacturing factories before it was ordered to close down by the South Korean government a year ago. [JANG JIN-YOUNG]

Peering through a pair of binoculars, the area looked completely deserted at first. It was a far cry from the scene before Feb. 10, 2016, when North Korean workers would often come out for a stretch as throngs of buses snaked along the narrow roads.

All that could be seen last week were a few North Korean civilians idly passing by on ox wagons. North Korean soldiers looked bored. They weren’t the vigilant post guards from last year. An official from the South Korean military said they were too relaxed nowadays.

“When you’re working on the front line, it’s common sense to always have your gun with you wherever you go,” said the source, who wished not to be named. “But I’ve witnessed several North Korean soldiers without their weapons, leaving them outside their guard post.”

Tilting the binoculars a little to the right, there was a small village comprised of 13 houses, all brightly painted lime green. Towards downtown Kaesong, all the apartments had ditched their grey tone for a vivid pink.

“I think it’s some sort of a gesture,” said a South Korean government official, adding, “It’s their way of telling us that ‘Our regime is doing just fine even without the industrial complex.’”

The Customs, Immigration and Quarantine Office, just south of the demilitarized zone, was at the brink of shutting down. Toll gates were blocked, security check points were without a single person or light switched on. The snack bars on the second floor, which used to sell various North Korean snacks, were gone without a trace left behind.

“We used to have around 100 workers here from 10 different government offices, including the Ministry of Unification,” said Won Ki-seon, who heads the customs office. “Now we downsized to about half that number, keeping just enough people to immediately get back to work if ever necessary.”

What used to be a symbolic landmark of inter-Korean cooperation, where 1,500 South Koreans passed through every day, has now become barren and desolate.

As to whether the South will ever resume business in Kaesong, a senior official from the Unification Ministry said last week under the condition of anonymity that “significant changes in North Korean nuclear affairs” would have to be a prerequisite.

The Rodong Sinmun, Pyongyang’s state-run newspaper, blasted Seoul for suspending the Kaesong project in a commentary issued shortly after the decision last year, calling President Park Geun-hye a “traitor for all ages” and warning that the “South Korean puppet group will experience disastrous and painful consequences.”

The paper added, “The recent provocative measure is the end of the last lifeline of North-South relations,” saying that it would drive the Korean Peninsula to “the brink of war.”