Cases of foot-and-mouth in Chungcheong are 5th batch

Cases of foot-and-mouth in Chungcheong are 5th batch 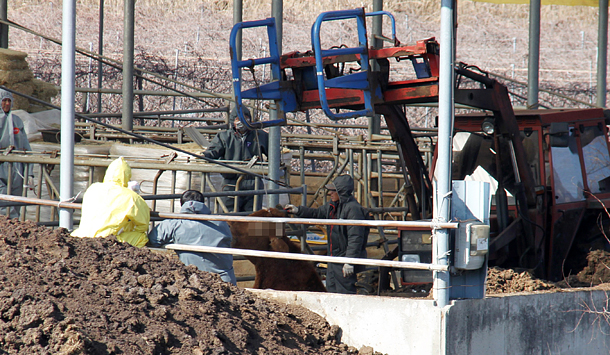 A fifth outbreak of foot-and-mouth disease (FMD) case was confirmed at a cow farm in North Chungcheong, the agriculture ministry in Sejong said Sunday, raising concerns over a nationwide spread of the virus.

Some 70 cows in Boeun, North Chungcheong, some 180 kilometers (112 miles) southeast of Seoul, tested positive for the contagious virus, according to the Ministry of Agriculture, Food and Rural Affairs.

Only a week has passed since the first outbreak was confirmed at a dairy farm in the same county. Previous infections took place in the central Gyeonggi Province and the southeastern region of North Jeolla Province.

On Thursday, the government raised the watch level to the highest point of the country’s disease control system and closed all livestock trading markets across the nation, with a ban on movement of animals, until Feb. 28.

It is the first time in seven years that the country issued the highest alert against the FMD virus. In 2010, nearly 3.5 million FMD infected cows and pigs were culled over nearly six months.

Foot-and-mouth disease affects cloven-hoofed animals such as cows, sheep and pigs. Korea reported its last outbreak of the disease on March 29 last year. The disease does not affect humans.

At the same time, the country has already been struggling with avian influenza for nearly three months, with more than 30 million chickens and ducks culled.

Meanwhile, the government decided to import vaccines for both O and A types of FMD for 1.6 million cows before the end of this month in order to deal with different strands of the animal disease sweeping through the country. It will also import additional type O vaccines for 3.2 million cows.

The government’s vaccine stock is mostly for type O, with no stockpile for the A type because it is rare in South Korea.

The only time that the type A virus was found here during eight previous outbreaks was in 2010.