In Seoul, a battle for the skies

In Seoul, a battle for the skies 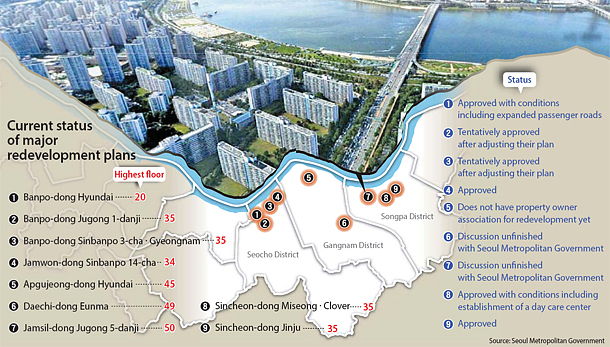 Depending on what floor the apartment is on, riverfront property prices can jump several million won. An 84-square-meter (904-square-foot) unit in the Seoul Forest Trimage complex in Seong-su dong, on the northeastern bank of the Han River, might go for 1.3 billion won ($1.1 million) in the mid-to-lower floors, but the price can skyrocket to 1.5 billion won on higher floors.

Technically speaking, the right to enjoy city landmarks like the Han River and Mount Namsan is granted to every Seoul denizen, according to the city government. This is what’s traditionally called right of prospect, and it guides many governments’ decisions to regulate building height in many parts of the world.

In Seoul, a conflict is brewing between the city government, which wants to lower building heights in residential neighborhoods, and associations of riverfront property owners who want to redevelop their buildings to make them taller. In 2013, Seoul Mayor Park Won-soon implemented a plan he called the “2030 Seoul Plan,” which would lower the maximum height of residential apartment buildings from 50 to 35 stories. This naturally sparked outcry from property owner associations.

On Thursday, the city government announced regulations that limited building height in certain neighborhoods to 35 floors. Daechi-dong, an affluent neighborhood near the southern bank of the Han River, was one of them.

The next day, an association of property owners hoping to redevelop the Eunma Apartment complex in Daechi-dong unveiled plans to rebuild the complex with 49 floors, in direct defiance of the government.

Redevelopment projects can affect an area’s property prices even before they commence. Even the slightest possibility of redevelopment can give prices a bump. Jamsil-dong, an area in southern Seoul that might be approved for 50-story buildings because the government has not categorized it as a residential neighborhood, has seen prices rise, while Daechi-dong apartment prices have fallen.

The Seoul government has defended its apartment height regulations by invoking the right of prospect, arguing that enjoyment of cityscapes should not be limited to a few wealthy residents. “Overly tall apartments in residential areas invade the right equally shared by every citizen to enjoy Seoul’s scenery,” said Kim Hak-jin, an official in the government’s city planning department.

Of course, property owners also have a financial reason to push for taller buildings. The higher up the apartment, the more they can charge.

“For the sake of the common good, a moderate amount of regulation seems necessary,” said Song In-ho, a research associate at the Korea Development Institute, who argued in favor of height limits.

But even if height limits do exist, “they should be applied more flexibly according to region and neighborhood characteristics,” said Shin Kyo-un, a professor of real estate studies at Konkuk University.