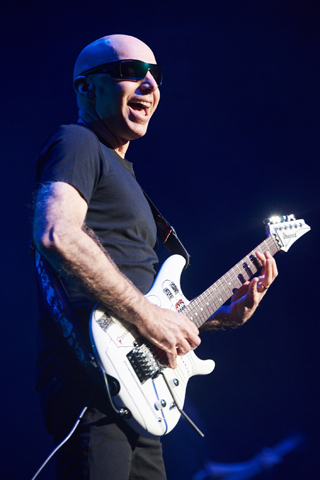 
The New Year has so far been an extraordinary time for fans of rock in Korea. From Metallica to Jeff Beck, and the upcoming Generation Axe concert featuring Steve Vai and Zakk Wylde, Seoul has welcomed some of the most talented musicians of the genre.

Luckily for fans, the bar is continuously being set higher, and with the recent performance by Joe Satriani, one of the undisputed kings of the electric guitar, concertgoers may be asking themselves if anyone can surpass the guitar wizard’s jaw-dropping performance?

For the first time in the 60-year-old guitarist’s celebrated 30-year career, he made a stop in Seoul as a part of the Asian leg of his Surfing to Shockwave tour. On Friday at the Yes24 Live Hall in Gwangjin District, eastern Seoul, Satriani showed why he is undoubtedly a modern-day guitar hero, not to mention the best-selling instrumental rock guitarist of all time. Fans were mesmerized by the musician’s fast-flying fingers, providing a show of his signature legato technique and pitch manipulating “whammy” effects.

The explosive two-hour set was both a visual and audio joy. Satriani’s interaction with the audience helped energize the already excited crowd of music lovers, and their enthusiasm didn’t go unnoticed.

“You guys are making us play like crazy!” said the guitarist, who sporadically signaled what looked like unanticipated jam sessions with his band. The musicians had a look of genuine surprise on their faces, but the musical back and forth among the band members was done so masterfully nobody would have doubted it if it were rehearsed.

Speaking of his band, Satriani enlisted the help of perhaps the most revered musicians in the genre. On the bass guitar was Bryan Beller, Mike Keneally handled keyboards and guitar, and Marco Minnemann was on the drums. These world-class virtuosos demonstrated mastery of their instruments, providing studio-quality performances of Satriani’s tunes. The set dedicated significant time to allow the band to shine as well, with Marco Minnemann’s drum solo being particularly memorable.

The set was a compilation of Satriani’s biggest hits from past records as well as additions from his latest album “Shockwave Supernova.” Although the newer tunes such as “On Peregrine Wings” and “Cataclysmic” were not initially recognized by the audience, fans were soon feeling the tight rhythmic arrangement and headbanging along.

It was when the band played hits such as “If I Could Fly” and “Always with Me, Always with You” the fans in the audience sang along. However, the crowd had to wait until the encore to hear Satriani’s megahit “Surfing with the Alien,” which closed out the captivating concert experience.

“He has always been my hero,” said Park Sang-jun, a 43-year old office worker who came to the concert with his guitar. “I remember trying to learn his songs when I was younger. Now I feel inspired again to learn after finally seeing him play live.”

What set Joe Satriani apart from similar acts, however, was style. Known for being a fan of science fiction and futuristic themes, the guitarist unleashed an artistic display utilizing lights and cheesy animation that was so in line with his legacy that the audience couldn’t help but be bewitched by the spectacle.