War over a “border tax”

War over a “border tax” 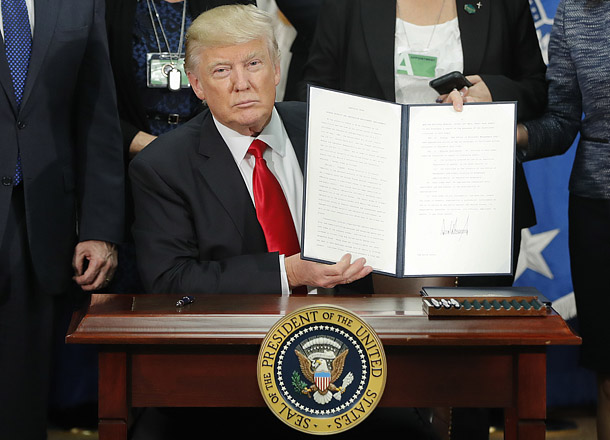 You are mistaken if you think only foreign companies are troubled because of U.S. President Donald Trump’s threatening tweets. American companies are just as affected, most notably Walmart. Trump has begun discussing tax reform.

Trump supports a “border tax” imposed on imports from certain countries, such as Mexico and China. The Republican Party is pushing for a “border adjustment tax” — a 20 percent tax on all imported goods. In return, companies manufacturing goods in the United States would enjoy lower corporate tax — 20 percent instead of 35 percent. At any rate, both Trump and the Republican Party want to protect the U.S. manufacturing sector and jobs by imposing higher taxes on goods produced outside of America.

Earlier this month, more than 100 American companies and trade groups, including Walmart, set up a lobbyist group opposing the tax reform. Members of the Americans for Affordable Products, or AAP, include Walmart, Target, Best Buy and many major American retailers.

Supporters of the border tax also set up the American Made Coalition. Boeing, GE and Pfizer are members. They argue that a border tax would elevate the competitiveness of manufacturing industries with production plants in the United States. This is a contest between manufacturers and retailers, exporters and the businesses focusing on the domestic market, and Boeing versus Walmart. The media
reported that a civil war in corporate America has begun.

Retailers claim that when the tax reform is implemented, each American household will have to pay $1,700 more to buy goods every year.

Internal opposition within the Republican Party is also considerable. Tim Phillips, president of Americans for Prosperity, said he would oppose the tax reform even harder than the group’s fight against Obamacare. He underscored that the border tax would lead to a loss of purchasing power for millions of low-income and middle-class Americans. Conservative commentator Larry Kudlow, who is known to have contributed to the drafting of Trump’s tax plan, said that once the border tax is imposed, it would be crossing the Rubicon.

The discussion on the border tax has just begun. On Feb. 14, a Financial Times’ report included a graph on top U.S. importers by number of ocean containers transported. Wal-Mart Stores is the top, followed by Target and Home Depot. Samsung America is the sixth and LG Group is the eighth, ahead of IKEA in tenth place and Nike in twelfth.

The European Union is taking preemptive actions by mentioning the possibility of taking the case to the World Trade Organization, even when the border tax is not on the table yet. What else should Korean companies do aside from announcing a plan to build appliances plants in the United States? In this strange time, the Korean government and companies have a lot to think about.