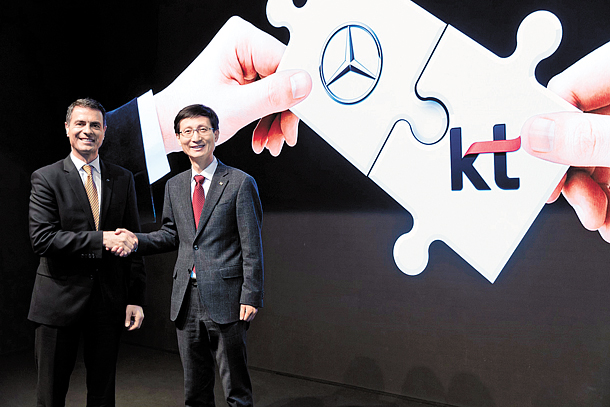 Mercedes-Benz Korea is launching a connected car service, one of the most highlighted features of future cars, in collaboration with local mobile carrier KT, the automaker said Wednesday.

The launch places Mercedes in direct competition with BMW Korea, which announced a partnership with SK Telecom to work on connected cars last year.

Connected car technology connects drivers, vehicles and service centers via a wireless system installed inside the automobile to offer customers enhanced safety and convenience features. As a wide range of applications are possible with the technology, it is seen as a future growth engine for carmakers along with developing electric and autonomous cars.

The German automaker’s service, dubbed “Mercedes me connect,” works in three call-type functions. The bCall, which stands for breakdown call, enables drivers to request 24-hour roadside assistance if a vehicle breaks down.

The eCall, or emergency call, delivers passenger and vehicle-related information, such as the location of the vehicle or how many passengers were wearing seat belts, to service centers after detecting danger.

The iCall, or information call, provides answers to drivers’ inquiries such as those related to destinations and nearby restaurants.

Drivers themselves also can monitor and check a car’s status such as the condition of its brake pads and fuel efficiency in real time via their smartphones.

Mercedes said it chose KT as a partner as “KT had successfully completed the development of a localized connected car platform by the end of last year.”

The automaker is using KT’s LTE network, a high-speed bulk storage network established nationwide. “Cooperation for applying 5G network, the next generation network after LTE, is in discussion,” a KT spokesperson said.

Its competitor BMW Korea teamed up with SK Telecom and demonstrated a test-drive of their connected car based on 5G network last year at a driving center in Incheon. The car recently succeeded in transmitting data at 3.6 gigabits per second in a car traveling 170 kilometers per hour, SKT said last week.

Among Korean automakers, Hyundai Motor also has made connected mobility as one of its core visions for the future and is pushing for deals with global companies like Cisco and start-ups to produce connected cars.