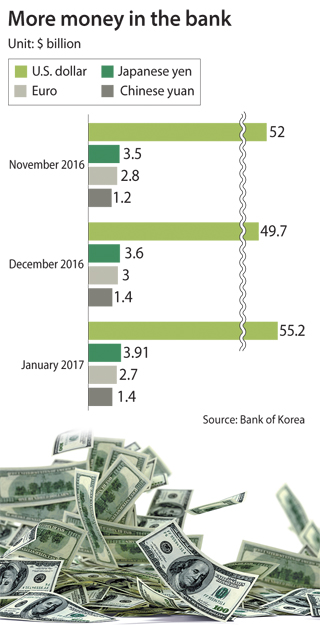 With increasing volatility in the Korean won and Chinese yuan, U.S. dollar-denominated accounts in the country have expanded significantly, according to new data released by the Bank of Korea on Thursday.

Foreign currency-denominated accounts in Korea expanded 9.7 percent to $64.65 billion last month from $58.9 billion in December. This was the first time in five months that accounts grew from the previous month.

The figure includes foreign currency deposits held by Koreans, expatriates and both domestic and foreign corporations that have been in the country for more than six months.

U.S. dollar-denominated accounts stood at $55.2 billion, making up 85 percent of all foreign currency deposits. Dollar deposits rose by 11 percent from $49.7 billion in December.

“It appears export companies have been delaying exchanging profits made through the dollar as the currency has been weakening recently,” said Koh Seok-kwan, a director at the central bank. “The U.S. dollar strengthened at the end of last year ahead of the new administration, but it weakened starting from last month. Companies tend to try making as much profit as possible through currency exchange.”

Among the $5.57 billion month-on-month growth in dollar-denominated accounts, $5.1 billion, or 91.6 percent of them, were held by corporations.

Dollar-denominated accounts continued to rise recently as Korea’s current account balance recorded a surplus for 58 months straight as of December, which means exporting companies making their profits in dollars have more in their savings.

However, euro deposits fell to $2.7 billion last month from $2.96 billion in December, while the Chinese yuan remain unchanged at $1.35 billion.

Total foreign currency accounts in local financial institutions increased to $53.3 billion last month from $3.84 billion from a month earlier. For foreign banks in Korea, the figure jumped to $11.3 billion from $1.89 billion during the same period.

Among the total deposit amount of $64.65 billion, 83.4 percent of it was held by both domestic and foreign corporations. Deposits by companies went up $5.22 billion from the previous month to reach $53.9 billion last month, and the figure for individuals rose $520 million to $10.7 billion.

On the same day, the Bank of Korea also released data showing that household debt rose the most last year due to a record-low interest rate and heated real estate market in the country.