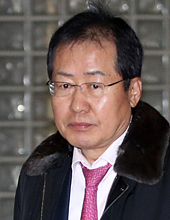 The Seoul High Court ruled in favor of Hong saying that the testimony by a man who allegedly delivered the bribe did not prove the charge against the governor beyond a reasonable doubt.

Last September, Hong was found guilty of taking money from the late businessman and politician Sung Wan-jong and sentenced to 18 months in prison by the Seoul Central District Court.

Hong was convicted of accepting 100 million won ($87,700) from Sung, former chairman of Keangnam Enterprises, through Sung’s aide Yoon Seong-mo, former vice president of Keangnam, in June 2011. The money was allegedly delivered in a paper bag and Hong was accused of receiving the money in his National Assembly office.

The district court found Hong guilty based on the testimony of Yoon and a phone interview Sung did with a local newspaper hours before his suicide on April 9, 2015.

The high court said Yoon’s testimony appeared credible on the surface but many parts did not involve his own experience. The court said the testimony was inconsistent and disagreed with some facts.

The court said the part of Yoon’s testimony about his visit to Hong’s office in the National Assembly lawmakers’ building was particularly unreliable. Yoon said he entered the building through a basement entry at the rear of the building. But the building was undergoing construction at the time, and that entrance was not possible.

“Yoon said it was the only time in his life that he delivered 100 million won to another person, so it is hard to understand that he could not remember such conspicuous construction activity when he was having that experience,” the court said.

The court also said Hong didn’t have a reason to take the money. Hong and Sung did not have a close relationship, the court said, and many politicians were aware of Sung’s previous criminal punishments for having donated illegal political funds, making it unlikely that Hong would accept Sung’s money.

The court said it was also suspicious that Yoon handed over the money in Hong’s office in the National Assembly, because of the openness of the space.

While the initial conviction was considered an end to Hong’s presidential ambition, Thursday’s acquittal could reignite Hong’s political dream. Hong, a member of the ruling Liberty Korea Party, is expected to run for the presidency.