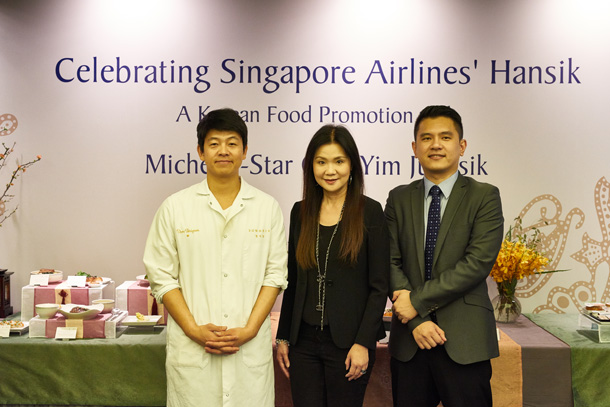 From March 1, Singapore Airlines passengers en route from Incheon to Singapore will be able to enjoy Korean dishes developed by Yim from first class to economy.

“We have passengers from all over the world with diverse and sophisticated palates,” said Betty Wong, a divisional vice president of customer experience at Singapore Airlines, during a media event at the one-Michelin-starred Jung Sik Dang in Cheongdam-dong, southern Seoul on Friday. “With the increasing popularity of hansik (Korean cuisine), it has become a natural step for us to offer a complete Korean meal on planes.”

Wong added that it was a one-year of process to develop the menu with Yim, overcoming the challenges of in-flight cooking conditions.

“I focused on coming up with more traditional Korean offerings rather than the modern versions that Jung Sik Dang is well known for,” Yim said.

“I used to think in-flight meals have very bland textures, so I tried to supplement that,” he added.

Economy class has the option of perilla oil bibimbap with beef or pork.

The collaboration with Yim is Singapore Airlines’ latest attempt to serve better and more varied meals. The airline has been running what’s called an international culinary panel since 1998 comprised of world-renowned chefs to advise on its in-flight meals.

“We don’t want to compromise our customers experience just because they are inside an airplane,” said Wong.