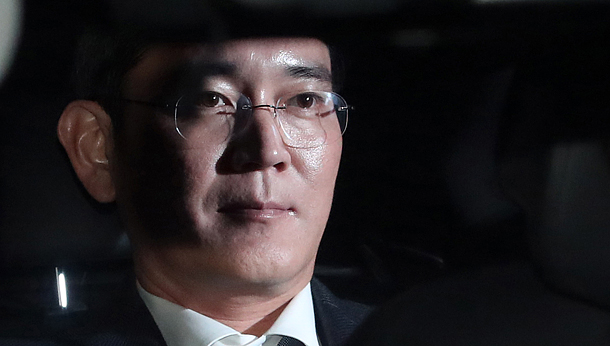 The independent counsel investigation of President Park Geun-hye’s alleged abuse of power and corruption, frustrated by a blocked raid of the Blue House and the president’s refusal to answer questions, finally had a victory Friday when a local court allowed the detention of Samsung Group leader Lee Jae-yong as a suspected briber.

Early Friday morning, the Seoul Central District Court issued a warrant to independent counsel Park Young-soo to detain the 48-year-old vice chairman of Samsung Electronics and the de facto head of the country’s largest conglomerate. Lee is suspected of offering bribes to President Park and her longtime friend Choi Soon-sil in return for political favors to solidify his control over Samsung.

After a seven-hour hearing, Lee went to the Seoul Detention Center Thursday evening to wait for Judge Han Jeong-seok’s decision. After the warrant was issued, he was immediately taken into custody. The warrant allows a 10-day detention with the possibility of a 10-day extension.

According to sources from the independent counsel, 39 work diaries of An Chong-bum, former senior policy coordination secretary for the president, acted as a “smoking gun” at the warrant hearing. The former economic czar of the Blue House kept meticulous records, including of Park’s orders, and An’s aide submitted them to the independent counsel last month, allowing the special prosecutors to add new charges to Lee’s warrant application.

Park was suspected of receiving bribes through Choi from several conglomerates, but the independent counsel, whose mandate expires on Feb. 28, concentrated its efforts on Samsung. Lee was the only tycoon detained by the independent counsel; he was also the first member of Samsung’s controlling family to be detained since the group was established in 1938.

The abuse of power and corruption scandal led to the National Assembly’s impeachment of Park in December. Choi and other Park associates are standing criminal trials after they were indicted last year. Park was named a co-conspirator, but avoided indictment thanks to presidential immunity from criminal prosecution.

Samsung Group issued a brief statement Friday, saying, “We will do our best to ensure the truth is revealed in future trials.”

The independent counsel suspects that Lee gave a total of 43 billion won ($37.5 million) in bribes using Samsung’s money to Park through Choi. Park allegedly pressured the state-run National Pension Service in 2015 to support a merger of two Samsung units that it invested in. The deal played a key role in Samsung’s third-generation transfer of management control by solidifying Lee’s grip on Samsung Electronics.

Park’s influence was also suspected when the Fair Trade Commission went easy on Samsung in 2015 during an investigation into the conglomerate’s cross-shareholdings. The court’s decision to allow the independent counsel to detain Lee as a suspect will add momentum to its investigation of the president. It has repeatedly stressed the need to question Park in person, but Park canceled a scheduled session on Feb. 9, complaining about a media leak about the plan.

He said investigators will conclude their questioning and indict Lee before the scheduled deadline of its probe on Feb. 28.

With 11 days left, the independent counsel is also seeking an extension, promised by the law. Thursday it requested Acting President Hwang Kyo-ahn to grant a 30-day extension, but speculation ran high that he will not allow it.

Separate from the extension request, opposition lawmakers are pushing to revise the law governing the independent counsel to lengthen its initial investigation period from the current 70 days to 120 days. If the change is made before the mandate runs out at the end this month, the investigators will earn 50 more days to conclude the probe by mid April.

Assistant independent counsel Lee said Friday that no progress was made yet in arranging a face-to-face questioning of the president. “The warrant to detain Lee was issued this morning, and we had no other special contact with the president since then,” he said.

He said the team won’t be able to investigate corruption charges involving other conglomerates unless it is granted an extension. When the team asked Hwang for an extension, it cited the lack of time to go after other companies as one of the reasons, Lee said.

The independent counsel investigation is also linked to the Constitutional Court’s impeachment trial. The court said it will hear final arguments on Friday, and a ruling is expected in early March. If the investigation is extended and if the court rules to permanently remove Park from the office, she will lose her presidential immunity and have to face more aggressive and forceful investigation.

Meanwhile, the independent counsel also said Friday it will summon Woo Byung-woo, former senior civil affairs secretary, for questioning today. Woo was accused of dereliction of duty by turning a blind eye to Park and Choi’s alleged abuse of power. He was also accused of abusing his power to interfere in public servants’ appointments and the prosecution’s investigation into the Sewol ferry’s sinking in 2014.