Kim snags top honors at Berlinale : She is the first Korean actress to be recognized at German film festival

Kim snags top honors at Berlinale : She is the first Korean actress to be recognized at German film festival 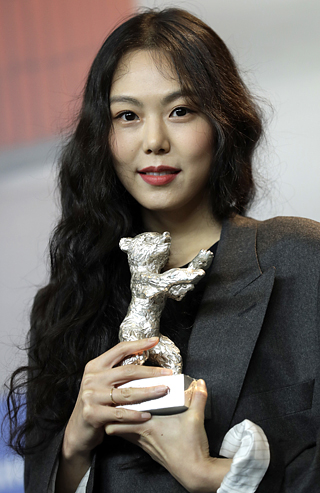 Actress Kim Min-hee snagged the best actress award at the 67th International Berlin Film Festival for her role in director Hong Sang-soo’s newest film “On the Beach at Night Alone.”

Kim took home the Silver Bear for Best Actress on Saturday, beating out tough competition from 17 other films. She became the first Korean actor to be honored at the Berlinale.

In the film, Kim plays a young actress whose affair with a married filmmaker leaves her with heart-wrenching pain of loss and longing. Many have suspected the plot is a reflection of what Hong, 57, and Kim, 34, are going through in reality. The two have been in a relationship since June, and Hong, who is the father of a daughter, filed for divorce from his wife in November.

“I’d like to thank the festival for inviting me and I’d like to thank director Hong Sang-soo for this wonderful film,” Kim said in her acceptance speech, with tears in her eyes. “This film will hopefully bring great emotions to those who see it, and therefore, I’m very proud of it. 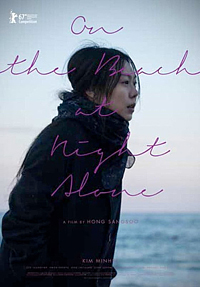 Director Hong Sang-soo’s latest film “On the Beach at Night Alone” was nominated for the prestigious Golden Bear award. [BERLINALE]

“I received a star-studded gift tonight. This award that I receive here, this happiness I feel is all thanks to Hong Sang-soo, my director in this movie. I honor you and I love you.”

Kim became the third actress to win the Best Actress award in one of the renowned European film festivals after Jeon Do-yeon won in 2007 with “Secret Sunshine” at the Cannes Film Festival and Kang Soo-youn in 1987 in “The Surrogate Womb” at the Venice Film Festival.

Kim debuted as a magazine and commercial model, but extended her career to acting in 1999, appearing in the KBS drama “School 2” (1999). Though she was better known for her fashion style as a former model, she gained notice for her acting skills with the 2012 mystery thriller “Helpless.” Her most recent role in “The Handmaiden,” which screened at the Cannes Film Festival last year, also garnered international acclaim.

Co-starring Kwon Hae-hyo and Jeong Jae-yeong, “On the Beach at Night Alone” is slated to hit local theaters next month.

Meanwhile, “On Body and Soul,” a Hungarian love story about two slaughterhouse workers who connect in shared dreams, won the top Golden Bear award at Berlinale that wrapped on Saturday after 11 days.

The film by writer-director Ildiko Enyedi, contrasts the harsh reality of life in the abattoir with the magical world of slumber. Enyedi was previously best known for her 1989 debut film, “My 20th Century,’’ which won the Golden Camera award in Cannes that year.

The Golden Bear had been expected to go to the comedy “The Other Side of Hope,’’ which instead earned veteran filmmaker Aki Kaurismaki a Silver Bear for best director. The film sees a young Syrian refugee befriending a grouchy Finn, with Kaurismaki’s deadpan humor delivering poignant messages about the horrors of war and the current refugee crisis in Europe.

The jury award went to “Felicite,’’ a film by French-Senegalese director Alain Gomis about a singer in a Congolese night club.

Georg Friedrich from Austria was named best actor for “Bright Nights,’’ in which he portrays a father trying to reconnect with his teenage son.

“A Fantastic Woman’’ by Chilean director Sebastian Lelio received a Silver Bear for best screenplay, shared with Gonzalo Maza. It tells the tale of a transgender woman mourning for her dead lover even as most of those around her remain unwilling to empathize.

The jury also awarded Dana Bunescu a prize for outstanding artistic contribution for her editing of “Ana, mon amour,” about a Romanian couple struggling to make their relationship work despite mental illness.