Gov’t-penned textbooks will be tested in a single school

Gov’t-penned textbooks will be tested in a single school 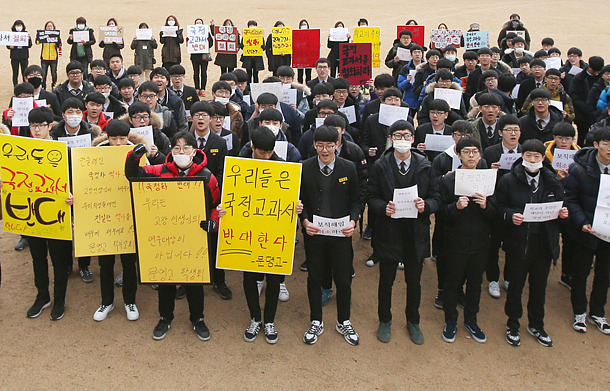 Some 100 students at the Munmyeong High School in Gyeongsan, North Gyeongsang, protest on school grounds Monday the school’s application to the Ministry of Education to become an experimental school to test out the state-authored history textbooks a year before they go into official use. [YONHAP]

After opposition from parents and teachers to the use of state-authored history textbooks, only one high school was selected by the Ministry of Education to test the controversial texts from March, a year before they technically go into official use.

“It is quite unfortunate,” the ministry said in its press release on Monday. The government-written history textbooks were a signature policy of the Park Geun-hye administration that was widely criticized by liberals, who said they were reminiscent of dictatorial days. They fell into greater disrepute when Park was impeached by the National Assembly for an abuse of power scandal.

The ministry accepted applications from middle and high schools from Wednesday, but only three applied: Gyeongbuk Aviation High School, Osang High School and Munmyeong High School. All are located in North Gyeongsang.

Only Munmyeong became a finalist because the other two schools cancelled their applications after severe opposition from parents and students.

Opposition was equally fierce at Munmyeong. Parents and teachers say the school single-handedly submitted the application and refused to cancel it despite their strong opposition.

Some 150 Munmyeong High School students and parents protested on school grounds on Monday.

“Just a while ago, I thought the state-authored history textbooks didn’t have much to do with me,” said Jung Yeon-sung, a 19-year-old student at the school. “Now that my high school is the only one in the whole country to become the ministry’s experimental school for the state-authored textbooks, it shames me to be part of this school.”

Although it was the middle of their spring break, many students showed up wearing their school uniforms and holding signs that read, “We have the right to learn history the right way,” and “Out with the state-authored history textbooks!” They marched through the school grounds and hallways chanting loudly.

The principal was not on duty Monday. He called in sick.

“Principal Kim Tae-dong is faking illness to hide from all this public anger,” said Kim In-je, also 19. “He must show up to apologize in person and cancel the school’s application to the Education Ministry.”

“I don’t think history should be interpreted by a single entity,” said a 49-year-old parent. “I am here to voice my opposition to the school’s decision to teach the students in a one-sided manner with such textbooks.”

The state-authored history textbooks have been criticized for painting a one-sided and favorable portrait of the dictatorship of former President Park Chung Hee, father of President Park, in addition to failing to shed impartial light on the nation’s shortfalls, including in rooting out pro-Japan forces after Korea’s independence.

“We followed proper procedures in applying to become an experimental school to try out the textbooks first,” said Ahn Hyu-jeong, vice principal of Munmyeong. “But I cannot say for sure what course the school will take from here, since the principal is not in his office to give answers.”

The Education Ministry said it was disappointed by the lack of enthusiasm among schools to try the texts. It said it may take legal action against heads of education offices who refused to share the ministry’s notice asking for schools to apply. Heads of some education offices in Seoul, Gwangju and Gangwon refused to convey the ministry’s notice to schools in their districts. The ministry said it plans to distribute the state-authored textbooks to schools that wish to use them as references this year, regardless of whether they are designated as experimental schools.