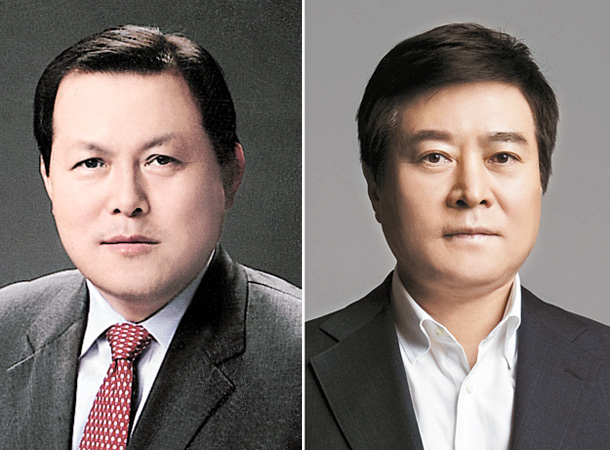 The company overhauled its strategy planning office, a core department at Lotte Group known to make major business decision in direct connection with Shin, by dividing it into two separate teams and downsizing the staff by 30 percent.

The Corporate Innovation Office comprises four teams in charge of value management, finance, communications and human resources. It will make major policy changes within the group.

The other team, the Compliance Committee, is dedicated to the group’s clean governance. The newly created team will oversee whether each subsidiary’s management teams abide by the law.

Hwang Kak-gyu, who has been called the group’s No. 3, has been appointed to lead the Corporate Innovation Office.

Hwang has been with the group since 1979 at Honam Petrochemical, a former name of Lotte Chemical. The 62-year-old has led major mergers and acquisitions and global business at Lotte since 1995, working closely with Shin. Hwang has been in charge of the strategy planning office since 2014.

So Jin-se, a leader of Lotte’s external affairs business, has been appointed head of the corporate social responsibility team which was formerly helmed by chairman Shin.

“In order to keep the promise to make a socially responsible company, Lotte appointed a major personnel as the new head of corporate social responsibility team,” Lotte said in a statement. “So will keep assisting chairman Shin as well.”

“Each business unit will work to create synergy among related affiliates,” the group said in a statement. “It will establish a common strategy to promote quality development.”

Lotte also added that the move is a preliminary step to shift the corporate structure to a holdings company to avoid cross-shareholdings that have been pointed out as a key factor behind murky business management at Lotte Group.

Retail and hotel units’ heads will be announced today and Thursday, after the board meetings.

The group has been through a tough time since last year, facing the largest-ever investigation in June over allegations of embezzlement and business malpractice.

The prosecutor’s investigation led to a great loss at the company, as Lotte scrapped a $4.5 billion initial public offering of Hotel Lotte stock and gave up its $3.1 billion bid for U.S.-based chemical company Axiall.

During the investigation, the group’s vice chairman Lee In-won was found dead, apparently of suicide, before he was scheduled to be questioned by prosecutors. Shin barely avoided arrest.

Lotte’s suffering continued this year after it came under fire for allegedly contributing to two nonprofit foundations linked with President Park Geun-hye’s longtime confidante Choi Soon-sil. Shin was summoned for a hearing along with six other conglomerate chiefs and grilled over his alleged connection to the influence-peddling scandal. Shin denied allegations the contribution was linked to its effort to win back the right to operate a duty-free shop at Jamsil.