Seoul mayor was confident, but lacked support for race

Seoul mayor was confident, but lacked support for race 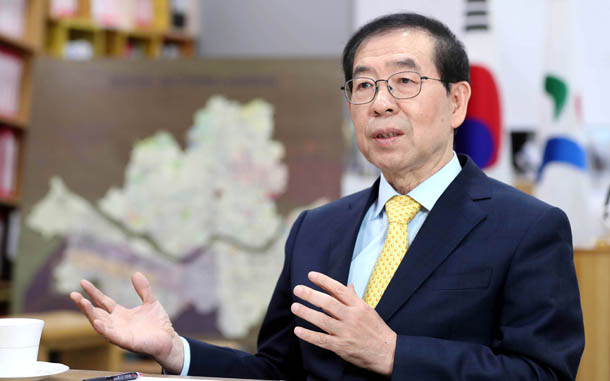 Hearing the news of Park Won-soon, Seoul mayor, dropping out of the presidential race, I felt a sense of regret. Park had sought to become a successful president of the Republic of Korea, and had stressed he was the most qualified politician. The confidence stemmed from Park being the popularly elected Seoul mayor who has served the longest, as he is in his sixth year. However, Park realized that he had a weak foundation in his party. Although he did not deny his chance to run for the presidential race next time, he spared his words when he asked about how to overcome the shortcomings. Instead, Park spoke on his plans in the upcoming year and a half left in his term as Seoul mayor.


Q. After announcing your decision not to run for the presidential race, how did you feel?

A. I felt, say, it’s like returning back home after a months-long trip. My mind is at ease and I am feeling good.


For a time, you were a leading candidate with high approval ratings.

That’s an old story. In retrospect, the thought that I was not prepared comes to mind. During that time, I had the confidence to administer the country from my prior experience, but there were a number of things I was not prepared for. I did not have the support of party institutions, nor the political influence and seeing that I could not receive national support … everything is due to my personal shortcomings.


Why do you think people did not commit to support you?

There was an article that analyzed my words for the last five years, but the words “citizen” and “Seoul” were overwhelming. During that time, I focused on taking care of Seoul citizens. Considering that, I [probably] should have [taken] a more country-wide approach.


If it wasn’t an early election, could you have had a rebound through the completion of the overpass park near Seoul Station?

That was not the reason the overpass park was initiated. When I was first-term mayor, I heard from many around me countless times that (like former [Seoul] mayor [and president] Lee Myung-bak,) I should use [a project] as leverage and run for the presidential election.
However, I refused the idea to the end. The overpass near Seoul Station was obsolete and had to be removed, but I had the thought of reusing it. The expenses were small and I thought it could have been a global project for a walkable community. It was one walkability project among many like the Seun Arcade project that allowed one to walk from Jongmyo [Jongno District] to Namsan [Jung District] in 20 minutes.


There are even those who say the completion of the overpass park corresponds with the April elections.

It could have been finished earlier, but it will finish at the end of April because the flowers will be in bloom and walking will be enjoyable.

Even with the existing overpass, its sole purpose was not just as a pedestrian path. Public projects require all sorts of the approvals in designs, contracts, feasibility analyses and the start of construction takes a minimum of three to four years. As I have served as Seoul mayor for six years, there will be many projects coming into fruition this year and the next year. Just this year, there will be the first opening of the Seun Arcade, the cultural depot and the Seoul Botanic Garden.


That must be what former party head representative Moon Jae-in’s words meant when he said you were well prepared in policy and would be the strongest opponent.

The media reports on candidates too much like racehorses. Rather than the path the candidate walked on, their accomplishments, instead of analyzing and comparing their vision, the media is bent on lining them up and making rankings. Looking at the media, there were many failed presidents. Has there ever been a successful president in our country? I want to be a truly successful president. To the point, after being sworn in, I will stroll along the road with my grandchild in hand, greet people and have a meal at Jaerae Market.


You became mayor too easily, is it possible you’re being vain?

While there was a race, because I became mayor too easily, I did not know the bitter taste of politics. There were many negative [articles about me], but I was indifferent to them. I thought if I worked diligently, they would all understand.


In your first term you advanced progressive policies such as free meal plans, in your second term you swung towards a conservative direction in the MICE initiative (Meetings, Incentives, Conferences, Exhibitions) or the Housing Project for Young People. Haven’t you lost the support of both liberals and conservatives?

I don’t think so. I always thought practically. Was not the motto of the Hope Institution I founded, “21st century Silhak movement?” [a social reform movement in 17th-19th century Korea]. A leftist and a rightist, a progressive and a conservative, what is all that? The imperative is to address the issues of ordinary people by developing the future. For me the free meal plan and intensifying welfare was feeding the people and MICE was for developing the people’s future sharing economy. I believe one can envision the Republic of Korea’s future looking at Seoul and the world’s future. Some time ago, a British newspaper, The Guardian, included me as one of five innovative mayors of the world.


Your approval rating would have gone up if you had publicized that.

The media should be doing that, how can we individually do so? That aside, the city named the best place to hold meetings, named first place in the world for wealthy tourists in spending time and money and first place for digital governance is Seoul. Looking at the Mori Foundation’s global power city index, Seoul is sixth in the world. In front of us are only London, New York, Paris, Tokyo and Singapore. The New York Times wrote, “What Silicon Valley Can Learn From Seoul.” The country’s economy may be experiencing difficulty, but Seoul possesses strong competitiveness.


You are the longest serving mayor, of all the things you’ve done, what are you most proud of?

How can I say that from my own mouth? Basically, what I have done is change the past’s paradigm. In the manner of hardware and software, focusing on civil engineering and construction, centering on the quality of life through manufacturing, tourism has become an integral industry in Seoul. Looking at the big picture, through innovation and governance, there were many things that were changed.

Seoul no longer ventures in useless projects, we have cut down on seven trillion won ($6.1 billion) in debt and increased social welfare from four trillion to eight trillion won. In order to eliminate welfare’s blind spot, we have employed 1,500 people looking for jobs by creating neighborhood community service centers. We also built 1,000 national day care centers. Doing so, the number of jobs increased by 220,000. There are some reservations on the implementations of welfare, but in the end, through social welfare, incomes increases, while consumption is boosted leading to a virtuous cycle that revolves small-medium businesses and increases tax revenues again at the end.


What are the future plans of the administration?

The strength that Seoul has is the same as London and New York. I met Eric Schmidt, the CEO of Google, and he said he was a big fan of Seoul. He said, where else can you find a city with such energy. The reason he established Google’s third campus in the world at Seoul is because he acknowledges Seoul’s potential. So, exploding from this potential, [Seoul] will rise from sixth to fifth or even fourth.

To do so, we can’t just be okay — an overwhelming advantage must be attained. Seoul is preparing for the mobility revolution. The mobility revolution as in going from home to your place of work. It isn’t just cars. There will be a revolutionary means of transportation ahead. Seoul will not slow down preparation and will be at the forefront. Starting from this year, there are plans to collaborate with Beijing.