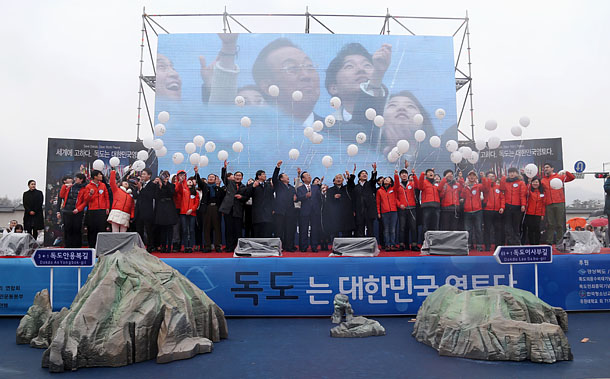 Civic activists gather at a large rally in Gwanghwamun Square, central Seoul, to proclaim that Dokdo islets in the East Sea is Korean territory on Wednesday amid rainfall, after the Japanese government sent a parliamentary cabinet vice minister to take part in Shimane Prefecture’s Takeshima Day ceremony. [YONHAP]

Seoul lodged a protest with the Japanese government Wednesday for dispatching a parliamentary cabinet vice minister to an annual event promoting Tokyo’s claims over Dokdo, Korea’s easternmost islets, for the fifth consecutive year.

The Japanese government earlier that day sent Shunsuke Mutai, a parliamentary vice minister of the cabinet office, to Shimane Prefecture’s Takeshima Day ceremony. Japan refers to the Dokdo islets in the East Sea as Takeshima.

This year, the Japanese central government, along with the local government, was involved in producing the official posters promoting the Takeshima Day event and distributing them to public offices and educational institutions nationwide, which Seoul is interpreting as a move to make the annual celebration a quasi-governmental one.

Shimane Prefecture designated Feb. 22 as Takeshima Day in March 2005, a century after declaring it as Japanese territory. It has held the celebration annually.

The Shinzo Abe administration has sent a parliamentary vice cabinet minister to the local ceremony since 2013.

Japanese Foreign Minister Fumio Kishida said in a budget meeting of the Diet’s lower house that Dokdo is “clearly Japan’s inherent territory based on historical fact and under international law,” reported Japanese broadcaster NHK that day.

Kishida was reported to have said that Korea is “illegally occupying Takeshima without any basis in international law.”

Japanese Chief Cabinet Secretary Yoshihide Suga said in a briefing that day, “Territorial sovereignty is fundamental for a country, and we will continued to put effort into such domestic enlightenment in the future.”

The Korean Ministry of Foreign Affairs summoned Hideo Suzuki, a minister and deputy chief at the Japanese Embassy in Seoul, Wednesday afternoon to lodge a formal protest.

The ministry said through a statement that the Korean government “strongly protests” a high-ranking Japanese central government official participating in the Takeshima Day event in Shimane, which it called “a continuation of its unreasonable claims over Dokdo.”

Cho June-hyuck, spokesman of the Foreign Ministry, said, “The Japanese government should immediately halt such futile behavior over Dokdo, which is clearly an integral part of Korea’s territory in terms of history, geography and international law, and to humbly face historical facts.”

A group of civic organizations gathered in front of the location of the former Japanese Embassy building in Junghak-dong in central Seoul on Wednesday, then marched to Gwanghwamun Square braving rainfall. Similar rallies took place in cities in Gyeonggi, including Seongnam and Osan.

Civic organizations and university newspaper reporters from schools including Korea University and Dongkuk University also gathered at the National Assembly in Yeouido, western Seoul, calling for education about Dokdo to be included in the general university curriculum.

Likewise, hundreds of Ulleung County, North Gyeongsang, residents, county officials and visitors also took part in a rally on Ulleung Island protesting the event in Shimane, calling out “Dokdo is our land!”

Dokdo, effectively controlled by Korea, is considered a part of the county.

Ulleung County’s Dokdo Administration Office on Wednesday said it has issued 28,968 honorary Dokdo residency cards since November 2010. This includes 725 foreigners including seven Japanese who are generally college students and tourists.

Seoul earlier this month protested the Japanese Education Ministry’s new textbooks guidelines for elementary and middle schools that for the first time claimed Dokdo as an inherent part of Japanese territory.