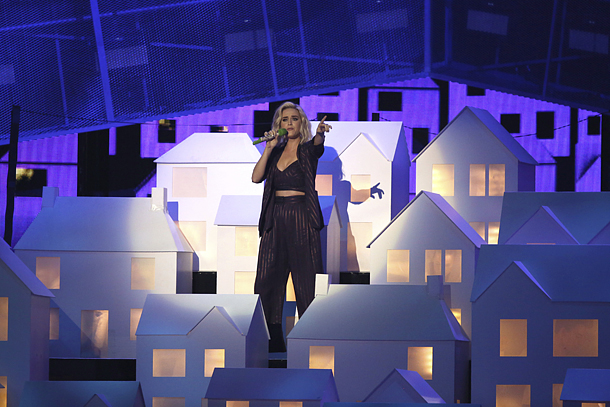 Singer Katy Perry performs on stage at the Brit Awards 2017 in London, on Wednesday. [AP/YONHAP]

LONDON - The Brit Awards recognized big international stars including Drake and Beyonce and a cross-section of home-grown talent Wednesday - but the ceremony was overshadowed by the much-missed David Bowie and George Michael.

Bowie, who died in January 2016, was crowned British male artist of the year and won British album of the year for “Blackstar,” released days before his death.

Bowie’s son, filmmaker Duncan Jones, accepted the best album award on behalf of his father, who he said had “always been there supporting people who think they’re a little bit weird or a little bit strange, a little bit different.”

As well as rewarding Bowie, the show paid tribute to one of the music industry’s many losses of 2016 - George Michael, who died on Christmas Day aged 53.

His Wham! bandmate Andrew Ridgeley said that with Michael’s death, “a supernova in a firmament of shining stars has been extinguished.”

Coldplay singer Chris Martin performed a moving rendition of Michael’s “A Different Corner” - dueting with a recording of Michael himself and backed by a group of violins.

The flashy show at London’s O2 Arena opened with girl group Little Mix giving a thunderous performance of “Shout Out to My Ex,” backed by a troupe of silver-pained dancers. The song went on to be named British single of the year.

There were also performances by Bruno Mars, The 1975, Coldplay, Ed Sheeran, Robbie Williams and grime musician Skepta on a night where Britain’s music industry celebrated U.K. talent and a smattering of international stars.

Soulful chanteuse Emeli Sande was named female British artist of the year, while Manchester indie pop group The 1975 won the trophy for best British band. Singer Matt Healy noted that the band, whose album “I Like It When You Sleep, for You Are So Beautiful Yet So Unaware of It” has been a hit on both sides of the Atlantic, had the same lineup since the members were 13.

Few of the winners and performers took up the invitation. The closest thing to edginess at the show was provided by a pinstripe-clad Katy Perry.

She performed “Chained to the Rhythm” - with its references to zombified people “living in a bubble” - accompanied by Skip Marley and a pair of skeletons dressed as U.S. President Donald Trump and British Prime Minister Theresa May.